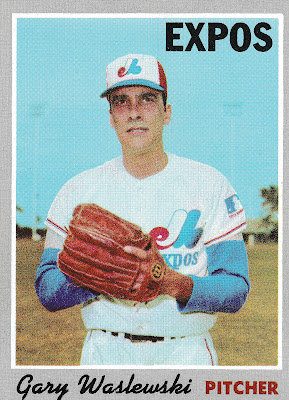 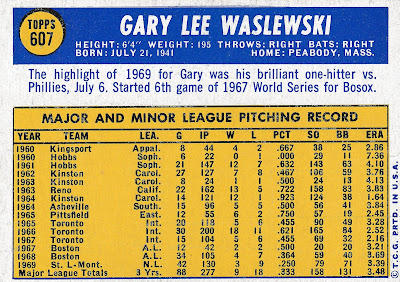 Posted by Jim from Downingtown at 9:00 AM No comments:

Stahl was signed by the Athletics in 1960, and labored in the minors for 5 seasons before making his major-league debut in September 1964.

He played briefly for the A’s in 1965 (June and September), then was with the team for all of 1966, playing in 119 games. It’s odd that with all that playing time, he was left out of the 1967 Topps set. (Meanwhile, a stiff like Bruce Brubaker and his previous grand total of ZERO major league games got a card that year.) 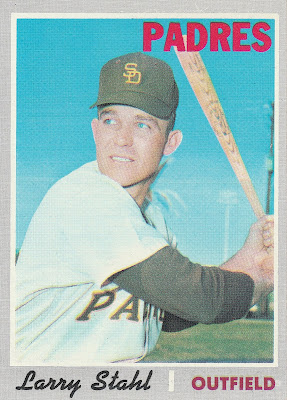 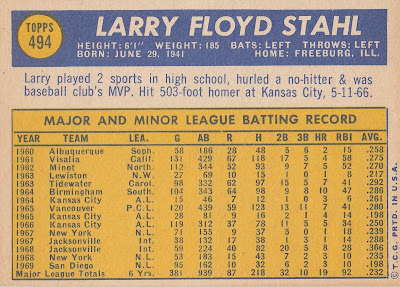 Stahl was picked up by the Mets after the 1966 season, and played most of 1967 with them (except for mid-May to mid-June, and for the 2nd half of the 1968 season. Unfortunately for him, the Mets had guys like Cleon Jones, Tommie Agee, and Ron Swoboda patrolling the outfield, so Larry was left exposed to the expansion draft and was selected by the Padres, thus missing out on the Mets’ 1969 miracle season.

Even with the fledgling Padres, Larry was no better than 6th outfielder, behind starters Ollie Brown, Cito Gaston, and Al Ferrara, along with Tony Gonzalez and Ivan Murrell. Stahl stuck around with the Pads for 4 seasons (except for spending the first 2 months of 1970 in triple-A).

To his credit, by 1971 he had advanced to being a co-starter in left field (along with Murrell and Leron Lee), and was actually 3rd among outfielders in innings played (behind Brown and Gaston), although he spent some time in right field as well.

In one of his final games with the Padres in September 1972, the Cubs’ Milt Pappas had retired the first 26 batters, only to walk Stahl, blowing a perfect game.

After the 1972 season, the Reds purchased his contract, and he spent his final season as the Reds’ 7th outfielder, being one of 5 players the Reds used in right field (along with Bobby Tolan, Andy Kosco, Johnny Bench, and Ken Griffey Sr).
Posted by Jim from Downingtown at 1:11 AM No comments: