This is the last card for long-time Dodgers' catcher John Roseboro (#655). John was signed by the Brooklyn Dodgers in 1952, and played in their minor-league system from 1952 to 1957, except for missing the 1954 season while in military service.

Roseboro made his major-league debut in June 1957. He got into 35 games for the Brooklyn Dodgers, as the 3rd-string catcher behind veterans Roy Campanella and Rube Walker. John took over the #1 spot for the 1958 season (the team's first season in Los Angeles) due to Campanella's automobile accident. Roseboro remained a fixture behind the plate for 10 seasons in Los Angeles, making the all-star team 3 times as a Dodger. 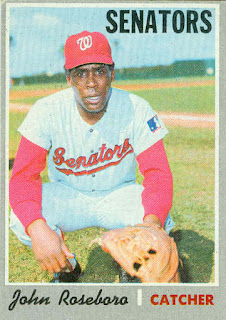 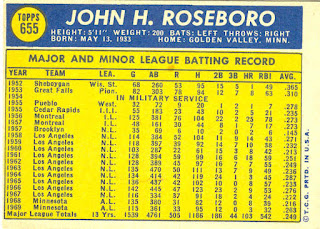 After the 1967 season, John was traded to the Twins (along with relief pitchers Ron Perranoski and Bob Miller) for pitcher Jim Grant and shortstop Zoilo Versalles. After 2 seasons as the Twins' starting catcher (and another all-star appearance), John was released after the 1969 season.

The Senators picked him up in the off-season, and 37-year-old Roseboro spent 1970 as the Sens' 3rd-string catcher behind Paul Casanova and Jim French. His last game was on August 11, 1970, and he was released a week later, ending his 14-year career. Besides catching 1476 games, he also played 6 games at 1st base, 2 at 3rd base, and 5 in the outfield.
Posted by Jim from Downingtown at 8:37 PM No comments: