Eddie Watt was the Orioles' closer from 1968 through the 1972 season. He pitched 411 games over his 10 seasons, all in relief except for 13 starts late in his rookie season.

Watt was signed by the Orioles in September 1961 and made his major-league debut in April 1966.

As a rookie, he appeared in 43 games, mostly in relief except for 13 starts from mid-July to mid-September. He returned to the bullpen for the final 2 weeks of the season, and stayed there for the remainder of his career. Eddie collected 102 strikeouts in his 1st year, 3rd on the team behind Dave McNally and Jim Palmer. 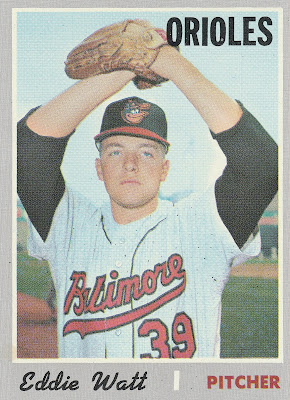 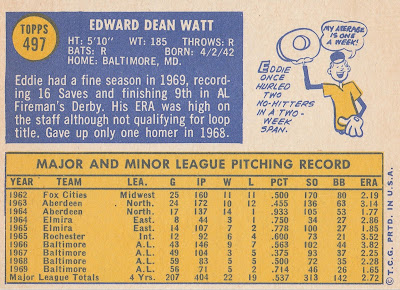 In 1969 he fashioned a 1.65 ERA, and appeared in 7 post-season games between 1969-71. (The O's won their first World Series in his rookie year of 1966, but Baltimore swept the Dodgers in 4 games (including 3 complete game shutouts) so most of the bullpen didn’t even play that Fall.)

After dropping to 3rd on the bullpen depth chart in 1973 (but with another post-season appearance), Watt was sold to the Phillies after the season, and pitched 1 year for Philadelphia.

The Phillies released him during spring training in 1975, and he was soon picked up by the Cubs, where he pitched only 6 games (the last coming in mid-June 1975) and finished the season with the Cubs' AAA team, then was released in early-September.

Posted by Jim from Downingtown at 1:55 AM No comments: