This is Jim Rooker's first solo card, and one of the many nice cards from the '69 and '70 sets featuring the new Royals' uniform.

Although the expansion 1969 Royals pitching staff was led by ex-Oriole veterans Wally Bunker and Moe Drabowsky, Rooker was one of several youngsters (along with Roger Nelson, Dick Drago, Bill Butler, and Tom Burgmeier) forming the foundation of a solid pitching staff. 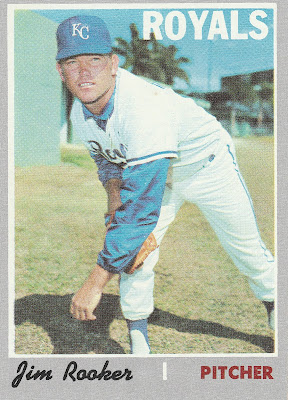 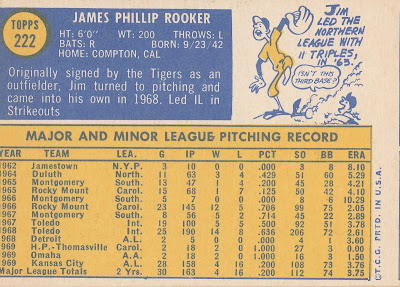 The day after the season was over, he was sent to the Yankees as payment for the earlier acquisition of pitcher John Wyatt. 2 weeks later, he was selected by the Royals in the expansion draft.

After the 1972 season he was traded to the Pirates for pitcher Gene Garber. He put in 7 solid seasons (1973-79) in the Pirates' starting rotation, and for the first few years was one of their top 3 starters (along with Jerry Reuss and John Candelaria) He played in the post-season in '74, '75, and '79.

Rooker only pitched 4 games in 1980 (the last on May 2nd) and was released after the season, ending his 13-year career.

Rooker's most famous moment as a broadcaster came on June 8, 1989, during a Pirates' road game against the Philadelphia Phillies at Veterans Stadium. The Pirates scored 10 runs in the top of the first inning, including three on a Barry Bonds home run.

As the Pirates' cross-state rivals came to bat in the bottom of the first, Rooker said on the air, "If we don't win this one, I don't think I'd want to be on that plane ride home. Matter of fact, if we don't win, I'll walk back to Pittsburgh."

Both Von Hayes and Steve Jeltz hit two home runs (the latter would hit only five during his Major League career) to trigger a Phillies comeback. In the eighth inning the Phillies, now trailing only 11–10, scored the tying run on a wild pitch, then took the lead on Darren Daulton's two-run single and went on to win 15–11.

Rooker had to wait until after the season to make good on his "walk home" promise, conducting a 300-mile-plus (480 km) charity walk from Philadelphia to Pittsburgh.


He now writes childrens' books.
Posted by Jim from Downingtown at 2:12 AM No comments:

Here's a surprising fact I just learned today while researching Smith's career. He began as a pitcher in the Tigers' organization from 1960 to 1963, including pitching 11 games for the Tigers in 1963.

(Baseball-Reference.com also shows that he played Negro League baseball in 1946 and 1948 (pitching 6 innings in '46 and 4 innings in '48), but that must be a mistake because he would have been 7 and 9 years old. Maybe it was an Eddie Gaedel-type stunt?) 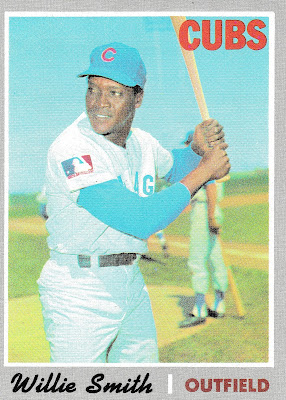 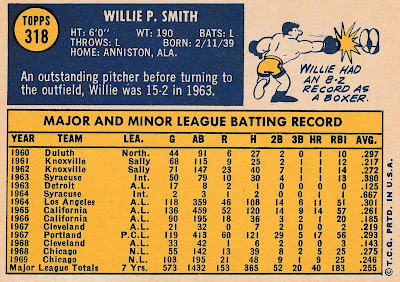 In April 1964 he was traded to the Angels for pitcher Julio Navarro, and was converted to an outfielder to get his bat in the lineup. He responded with a .301 average! Smith also pitched 19 games for the Angels that year. Willie was the backup left and right fielder, but was 2nd overall in innings played (717) among Angels' outfielders. Not bad having never played outfield before!

In 1965 he was the regular left fielder, playing 122 games there, but still #2 overall – this time behind rookie center fielder Jose Cardenal.

Willie's playing time decreased greatly in 1966. Young Rick Reichardt took over the left field job, and with rookie Jay Johnstone also joining the team, Smith spent a lot of time on the bench – only starting 40 games. After the season he was traded to the Indians for 3rd baseman George Banks (who never played in the majors after 1966).

Smith spent most of 1967 in triple-A, only appearing in 21 games for the Indians, mostly as a pinch-hitter in April and September.

He began the 1968 season with the Tribe, but again was used only as a pinch-hitter, playing in 33 games until his late-June trade to the Cubs for outfielder Lou Johnson. He had more success in Chicago, starting 36 games in left field (with Billy Williams moving over to right field on those days). The fact that Smith only played left field (or pinch-hitter), and moved a star like Williams out of position, makes me think Willie was either a defensive butcher or had a candy arm.

In 1969 he started 30 games in left field (again moving Williams to right field, not giving him a day off. Because Williams NEVER took a day off). Smith also made 16 starts at 1st base when Ernie Banks took a breather. Willie played more games that year (103) than any season since 1965.

His final lap in Chicago was 1970, but he only played 2 innings in the outfield all season. Rather, he was the 3rd-string 1st baseman (behind Jim Hickman and Banks), with 43 games (32 starts).

In November he was traded to the Reds, and split the 1971 season between Cincinnati (31 games) and their triple-A team (77).