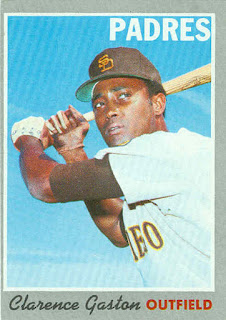 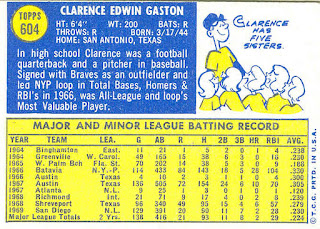 I still can't get over how stunning the contrast is on the back of the 1970 cards. Great color selection. i frikkin' love this set.

The Padres got some pretty good mileage out of the 30th pick in the expansion draft.

The Padres selected 8 outfielders in the expansion draft, but only #1 overall pick Ollie Brown had more starts that Gaston that first season.

The Padres sophmore year (1970) was surprising hard hitting team made more remarkable by playing in a pitcher's park. The 172 home runs they hit in 1970 is still the franchise's record. Gaston's contribution of 29 home run was most unexpected of the Padres. A tremendous season.