Nate Colbert was the first star for the fledgling San Diego Padres, leading the expansion squad in homers (24) and RBI (a paltry 66). (Regardless of how you feel about the borders, the 1970 cards have some nice photos, particularly for the 4 recent expansion teams who were poorly represented (photographically) in the 1969 set.)

Colbert was signed by the Cardinals in 1964, and played in the minors for 5 seasons before becoming the regular 1st baseman for the 1969 Padres.

Between those two years, he spent 1966-68 in the Astros’ farm system, banging 28 homers in 1967. Nate played 1st base in A-ball in 1966, but split his time between 1B and the outfield in double-A in 1967, since 1st baseman Bob Watson was also on his team. In 1968 Colbert exclusively played outfield in triple-A, because the Astros also had 1st base prospect John Mayberry on the same team. 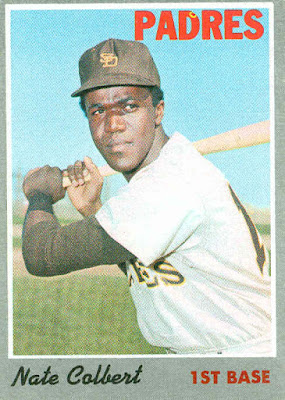 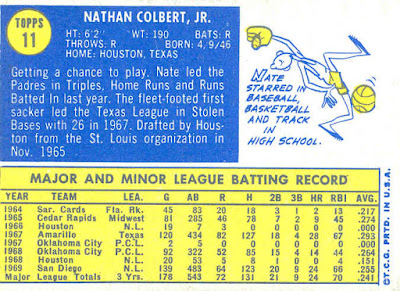 Colbert played a few games with the Astros in ’66 and ’68, but was clearly expendable, with Watson and Mayberry ahead of him on the path to Houston. The Padres selected him in the expansion draft prior to the 1969 season.

Nate had 5 solid seasons with the Padres from 1969-73, twice hitting 38 home runs and making the All-Star team 3 times. In 1972 he hit FIVE home runs in a doubleheader on August 1st, as the Padres swept the Braves.

After slumping to .207 in only 119 games in 1974, Colbert was traded to the Tigers for shortstop Ed Brinkman. By mid-June 1975 he moved on to the Expos, where he lasted until the following June.

A week after his June 2nd release, the Athletics signed him, but he spent the rest of the ’76 season in the minors, save for 2 games at the end of the season. Colbert was with the expansion Blue Jays in spring training in 1977, but did not make the team.

In his 10-year career, he hit 173 homers and collected 520 RBI, but NEVER played for a team that didn’t finish in last place (not counting the 2 games he played for Oakland at the end of the 1976 season).

He was inducted into the Padres’ Hall of Fame in 1999, its inaugural class.
Posted by Jim from Downingtown at 10:50 PM No comments: