Here is Walt Hriniak's first solo card (#392), which is also his final card. In fact, his major-league career was over in 1969.

Hriniak began in the Braves' farm system in 1961, and played in the minors for 8 seasons, mostly as a middle infielder. He didn’t begin catching on a regular basis until 1968.

After 8 seasons as the Braves' starting catcher, Joe Torre was traded to the Cardinals after the 1968 season. Torre had shared the starts with journeyman Bob Tillman 60/40 in 1968, with Hriniak making 6 starts during his September call-up. 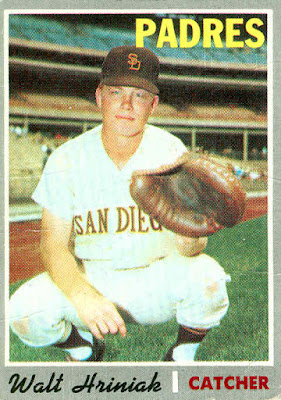 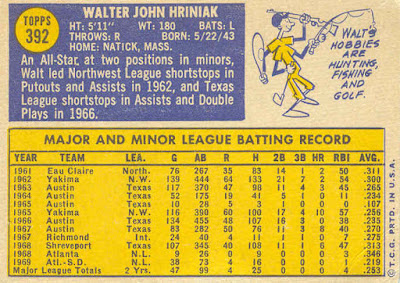 In 1969 the Braves seemed determined to go with 2 rookies behind the plate, as indicated by this high-numbered card in 1969: 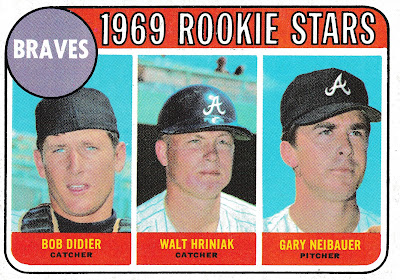 However, with no prior major-league experience, Bob Didier won the catching job in 1969, starting 108 games while Tillman stayed on as the backup, catching 52 games. Hriniak started 2 games in early-June (showcased?), then was traded to the Padres a week later for outfielder Tony Gonzalez.

Walt started 17 games behind the plate for the Padres in 1969, and appeared in another dozen games as a pinch-hitter. It was his final season in the majors.

He spent all of 1970 with the Padres' AAA team, mostly as a 2nd baseman. Just before the start of the 1971 season he was traded back to the Braves, who released him in July. A month later he was picked up by the Expos, but played the entire season, as well as '72 and '73, in the minors.

For someone with such a short and insignificant playing career, Hriniak became a well-respected hitting coach.  He began coaching in 1974, first for the Expos, then the Red Sox. Initially a base coach or bullpen coach, by the mid-1980s, he became Boston's hitting coach, working with players like Carl Yastrzemski, Wade Boggs, and Dwight Evans.

After 12 seasons with the Red Sox, Hriniak coached the White Sox for 7 season, then opened up his own hitting school.
Posted by Jim from Downingtown at 12:28 AM No comments: 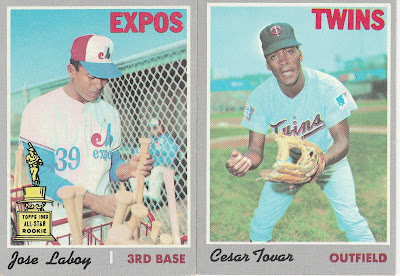 Posted by Jim from Downingtown at 5:22 PM No comments: