Look! Topps finally relented after 15 years and acknowledged his first name to be Roberto, not Bob. 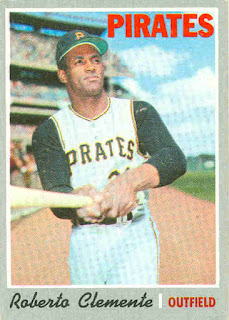 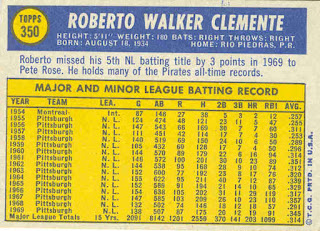 Clemente was a fixture in the Pirates' outfield since 1955. His only season in the minors was 1954 with the Montreal Royals (the Brooklyn Dodgers' triple-A team). According to Baseball-Reference.com, Roberto was signed by the Dodgers before the 1952 season, but didn't play until 1954.

The Pirates selected him in the Rule 5 draft following the 1954 season. I wonder if the Dodgers ever stopped kicking themselves for that mistake?
Posted by Jim from Downingtown at 6:37 PM 3 comments: