Jim Wynn played outfield for 15 seasons from 1963 to 1977. His first 11 seasons were with the Astros, then he moved around to 4 other teams in his final 4 seasons.

Wynn made his major-league debut with the Colt .45s in mid-July 1963. He started 13 consecutive games at shortstop, then moved out to center field for 9 games, before settling in as the regular left fielder for the final 2 months of the season, replacing Al Spangler.

Jim began the 1964 season as the team’s starting center fielder, but after starting 34 of the first 36 games, he was benched in mid-May, only to be sent down to the minors 3 weeks later, returning in September. 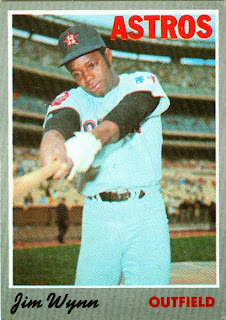 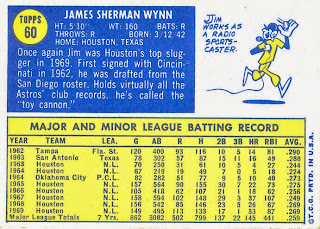 Wynn became a regular outfielder for the Astros from 1965 to 1973, mostly in center field, although he played in left field for parts of ’68 and ’70, then moved to right field permanently midway through the 1971 season, to make room for Cesar Cedeno in center field.

For a small guy, Jim was a power hitter (hence his nickname) and collected 291 career home runs, which doesn’t sound like a lot until you realize he played most of his career in the huge Astrodome.

After the 1973 season, he was traded to the Dodgers for pitcher Claude Osteen. In his 2 seasons with LA, Wynn regained a starting center field job, and made the All-Star team both years. He also played in his only post-season in 1974.

In November 1975, Wynn was part of a 6-player trade with the Braves that sent outfielder Dusty Baker to the Dodgers. Jim played one season with Atlanta (playing left and center fields), but when the Braves signed Gary Mathews as a free agent in November 1976, they sold Wynn to the Yankees 2 weeks later.

Unfortunately for Wynn, the Yankees also acquired Reggie Jackson and Paul Blair in the same off-season, and with Roy White, Mickey Rivers, Lou Piniella, and Carlos May already on the roster, there was no room for the Wynn. After playing in only 30 games, he was released in mid-July 1977, and picked up by the Brewers 2 weeks later.

Wynn DH-ed in 15 games and made 17 starts in center field for the Brewers, then was released after the season, ending his 15-year career.

The Astros retired Wynn’s #24 in 2005. He also worked as a post-game analyst for the Astros.
Posted by Jim from Downingtown at 3:43 PM No comments: 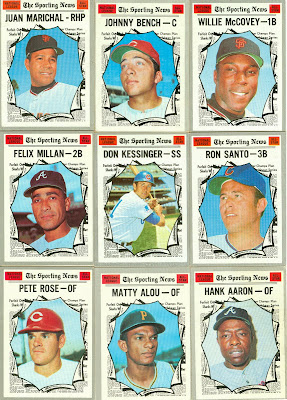 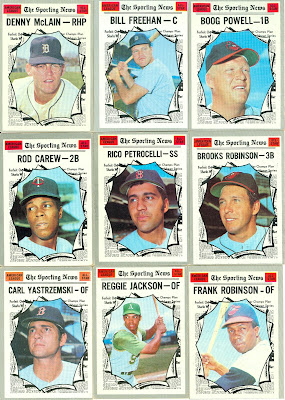 I posted Joe Torre's 1966 card previously, but a baseball lifer like Torre deserves better than the capless, lavender dreck that was the 1966 Braves (and Angels) cards. Here, Joe has a new team AND a new position. 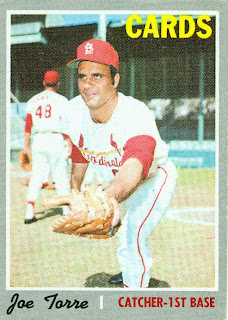 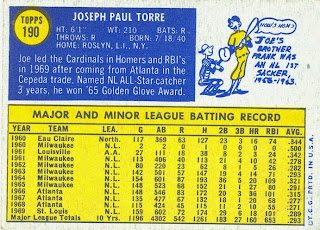 Like his brother before him, Joe began his career with the Milwaukee Braves. Joe was the team's regular catcher for most of his time with the Braves, and was a 5-time all-star.

After the 1968 season, he was traded to the Cardinals for Orlando Cepeda. Torre played mostly 1st and 3rd base for St. Louis, as they had Tim McCarver (and later Ted Simmons) behind the plate. In 1971, Joe led the NL in hits (230), RBI (137), and batting average (.363) and won the MVP award. He also made another 4 all-star teams while with the Cards.

After the 1974 season he was trade to the Mets for pitchers Ray Sadecki and Tommy Moore. Joe played for the Mets for 2 1/2 seasons, then took over as the team's manager in June 1977.

His greatest success as a manager was with the Yankees. He managed there for 12 years (1996 to 2007), never finishing lower than 2nd place. During his tenure, the Yankees won the division 10 times, the AL pennant 6 times, and the World Series 3 times.

Posted by Jim from Downingtown at 11:24 AM 2 comments: