Bob Oliver is the left fielder for our “Hangin’ at the Bat Rack” team. This is Bob’s 2nd card, as he appeared on one of the 4 Royals Rookie Stars cards in the 1969 set. He looks deep in thought, probably choosing a weapon to go yard on a sub-par Pilots' pitcher!

Bob was signed by the Pirates in 1963, and played 5 seasons in their farm system, mostly as a first baseman, but he also played a significant amout in the outfield, and at 3rd base and 2nd base. His major-league debut came with 3 games during a September 1965 call-up with the Pirates.

After the 1967 season, he was traded to the Twins for veteran reliever Ron Kline. After a full season with Minnesota’s triple-A team in Denver (playing almost exclusively as an outfielder), Oliver was selected by the Kansas City Royals in the October 1968 expansion draft. 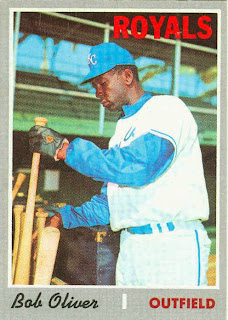 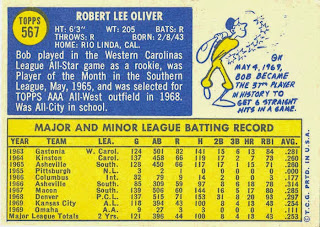 Bob began the 1969 season with the expansion Royals. He was the starting right fielder for the first 2 games, then was out of the lineup for 2 weeks – perhaps a short trip to the minors. He also missed a week or so in August, but otherwise was a regular for the ’69 team. He started 44 games in center, 41 games in right (he and Pat Kelly made most of the starts in both center and right). Bob also started a half-dozen games each at 1B, 3B and left field.

The following season, he moved to the infield. After starting 46 of the first 58 games at 3rd base, on June 16th Oliver moved across the diamond and started all but 3 games at 1st base for the remainder of the season. Bob hit a career-high 27 homers in 1970.

In 1971, he started 39 of the first 50 games at 1st base, but made only 5 starts there for the rest of the season, Instead, he was moved out to right field, which he shared with Joe Keough during the second half of the season.

Bob was the team’s right fielder for the first 16 games of 1972, then was traded to the Angels on May 5th for pitcher Tom Murphy. Oliver started 124 games at 1st base for the Angels that season, replacing 3-year regular Jim Spencer. This was the 2nd and last time he reached the 20-homer plateau.

In 1974 he was a part-time 1st and 3rd baseman, sharing 3rd base with Paul Schaal and Dave Chalk, and 1st base with John Doherty. Bob didn’t start more than 45 games at either position. In mid-September he was traded to the Orioles for pitcher Mickey Scott.

He was purchased by the Yankees after the ’74 season, and only played 18 games for them prior to his July 1975 release, ending his major-league career.

Jerry Moses was a catcher for the Red Sox and several other teams. Since our “Hangin’ at the Bat Rack” team already has a catcher, and the DH is still 3 years off, let’s just say he is batting for the pitcher.

Moses was signed by Boston in 1964, and played in the minors for five seasons, while also playing 4 games with the Sox early in 1965, and 6 games in September 1968. 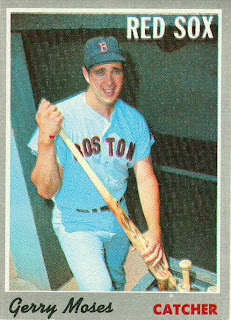 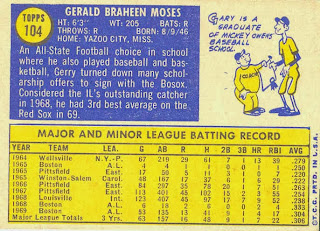 In 1969, Russ Gibson was the Sox’ #1 catcher. Moses started 6 straight games in mid-April, but when Boston acquired catcher Joe Azcue from the Indians on 4/19, Moses was relegated to 3rd-string catcher for the remainder of the season, even after Azcue was swapped to the Angels on 6/15 for C-3B Tom Satriano.

In 1970, Gibson was sold to the Giants 3 days before opening day, paving the way for Jerry to be the #1 catcher. He started 85 of the first 127 games (with Satriano catching the others), and made the AL all-star team. However, he did not play after August 28th.

Moses played for 6 teams (Angels, Indians, Yankees, Tigers, Padres, White Sox) in the next 5 seasons, all as a backup. In his final season (1975) he only played in 15 games, the last coming on August 9th. 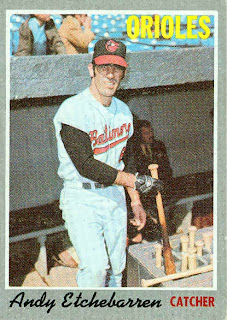 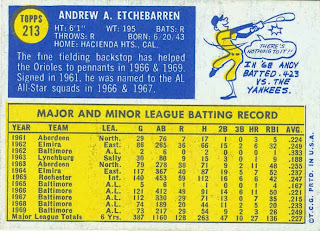 After his playing career, Etchebarren managed off-and-on in the Orioles’ farm system from 1984 to 2007. He also managed an independent Atlantic League team from 2009-2013.
Posted by Jim from Downingtown at 9:54 AM No comments: