John “Blue Moon” Odom had one of the all-time best nicknames in baseball history. He played for the Athletics from 1964-75, and played briefly for 3 other teams in the final 2 years of his career.

Odom pitched 8 no-hitters in high school and led his team to 2 straight state championships, with a combined 42-2-record.

The Kansas City Athletics signed him in June 1964. He played in the minors for the next 2 years, although making his big-league debut with a few games in September of that year, and also pitching 1 game for the A’s in 1965. 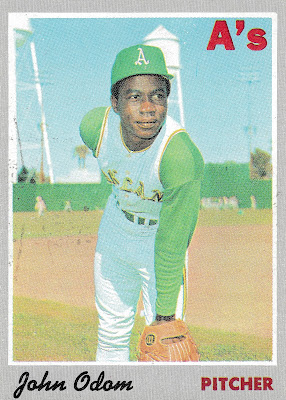 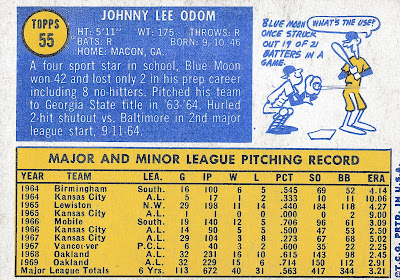 He joined Kansas City on a permanent basis at the end of June 1966, and compiled a 5-5 record in 14 starts in his rookie year. He also appeared in 3 other games as a pinch-hitter or pinch-runner.

In 1974, Odom spent most of his time in the Athletics’ bullpen, while Catfish Hunter, Vida Blue, Ken Holtzman, and various youngsters filled out the rotation.

In May 1975, Odom was traded to the Indians for pitchers Jim Perry and Dick Bosman. 3 weeks later, he was flipped to the Braves for pitcher Roric Harrison. Odom was 1-7 with a 7.07 ERA in 15 games (10 starts) for the Braves for the remainder of the 1975 season, and began the 1976 season in the minors.

In June ’76 he was traded to the White Sox for backup catcher Pete Varney, but didn’t get promoted to Chicago until mid-July. He pitched 8 games for the Sox from mid-July to mid-August, and was released the following January, ending his 13-year career.

Odom was inducted into the Georgia Sports Hall of Fame in 2004.

Posted by Jim from Downingtown at 5:20 PM No comments: