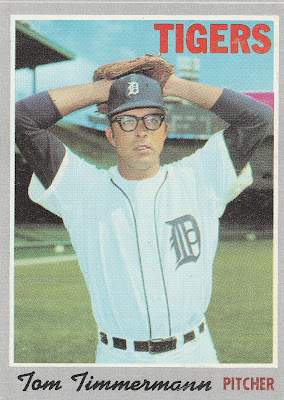 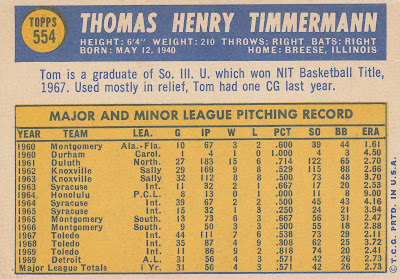 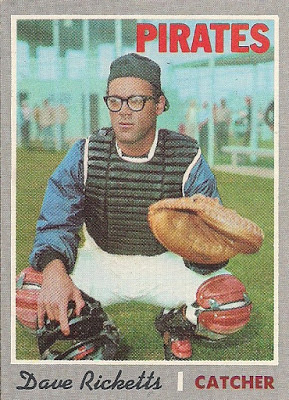 The 1970 Topps set had 720 cards. Team cards (24) returned after a 1-year absence. There are also 24 manager cards, 40 rookie stars cards, 12 league leader cards, a whopping 14 post-season cards (now that we have two LCS series), 20 All-Star cards, and 7 checklists. With all the additional post-season and team cards, there are no multi-player cards in the set. This leaves 579 cards of individual players.

That's a total of 547 cards. The remaining 32 cards featured players at more than 1 position. Unlike the previous 4 sets, there are hardly any cards with opposite position combinations (for example, we have many 1B-OF, but no OF-1B). Below is a sample of each position: 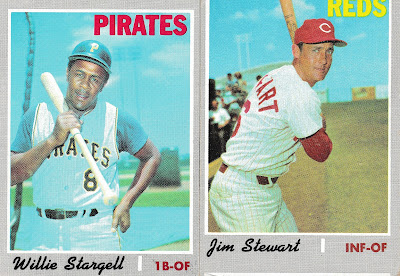 The 1B-OF combination appears the most (like it always does), but this time there are ELEVEN players: Willie Stargell, Frank Howard, Ken Harrelson, Ron Fairly and Bob Bailey (both on the Expos), Joe Pepitone, Tito Francona, Curt Blefary and Pete Ward (both on the Yankees), Andy Kosco, and Greg Goossen. Jim Stewart is the only player with the INF-OF position. 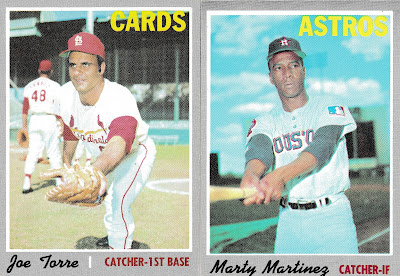 Joe Torre and John Boccabella are the C-1B players, while only Orlando "Marty" Martinez checks in with C-INF. 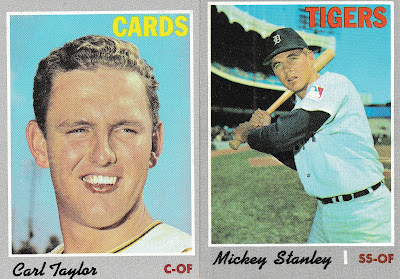 Carl Taylor and the Yankees' Frank Fernandez have C-OF on their cards. Mickey Stanley is the only SS-OF (despite not playing very much at shortstop over the 2nd half of 1969). 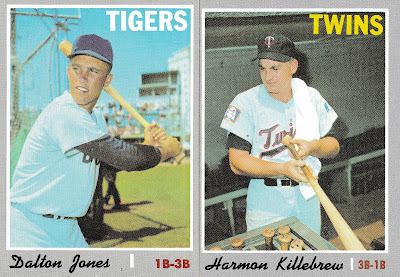 This is the only position combo that is featured both ways. Dalton Jones and the Pirates' Bob Robertson have the 1B-3B position, and Harmon Killebrew is the lone player with 3B-1B. 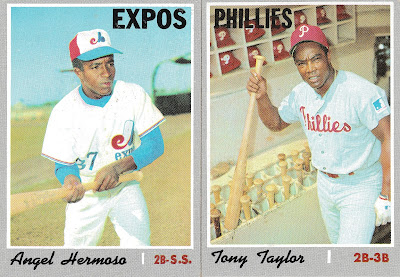 Angel Hermoso, Ron Hansen, and Steve Huntz all show 2B-SS, although for some reason Topps is abbreviating "Shortstop" as "S.S." on Hermoso's card. There are 5 players with a 2B-3B combination: Tony Taylor, Jim Lefebvre, Dave Campbell, Wayne Garrett, and the White Sox' Rich Morales. 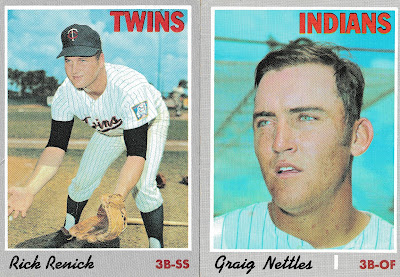 Rick Renick and Jose Pagan are the 2 players having the 3B-SS position. Graig Nettles is the only 3B-OF player in the set. 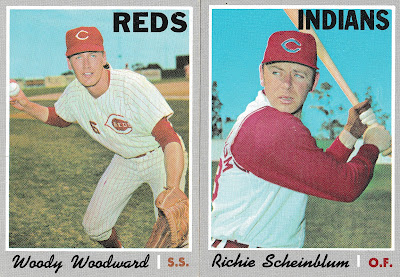 In addition to Angel Hermoso above, Topps also decided they needed periods to abbreviate these two players' positions.

There are only 2 outfielders for the Pirates and 3 for the Cardinals, but the Cubs and Giants each have EIGHT outfielders. (I thought that extravagance was reserved for the Angels!)

With all those outfielders, there was only room for 6 Cubs' pitchers. The White Sox have 7 pitchers, while most teams have 10 or 11.

I also noticed that Topps misspelled Gil Garrido's name as Gill Garrido (on the front only - the back is correct), and was now calling Clay Dalrymple "Clayton".
Posted by Jim from Downingtown at 7:50 PM 2 comments: