Here is Expos’ catcher John Bateman under the Daytona Beach palm trees during spring training, possibly practicing gunning out runners (maybe the slow-footed Ron Brand?) [I was at the Expos' spring training in Daytona in 1974, but by then Bateman had retired.]

Bateman and Brand were the top 2 catchers for the Astros for several seasons, then both were selected by the Expos in the expansion draft after the 1968 season. I think this is an interesting photo, not a typical vanilla pose, nor is he looking up in the sky for a popup like on some catchers’ cards. 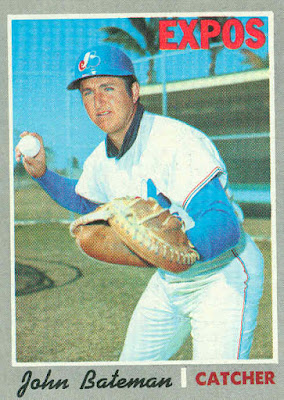 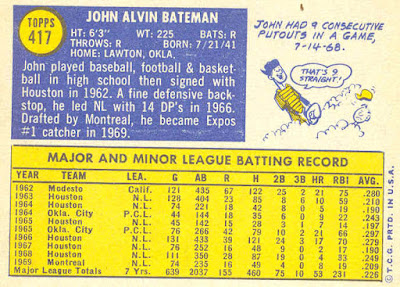 He opened the ’64 season as the starting catcher, but by mid-June rookie Jerry Grote was catching more games than John. By late-July, Bateman was sent back to triple-A and didn’t play another game for Houston until mid-September.

In 1965, Grote was in the minors for the entire season, while Bateman was back with the big club. However, Rule 5 pickup Ron Brand got 94 starts to Bateman’s 38 (with veteran Gus Triandos picking up the scraps).

The Expos selected John with their 3rd pick in the expansion draft (and also selected Brand with their next-to-last pick). Bateman started 136 and 133 games behind the plate in his 2 full seasons with Montreal.

1972 was a different story. Veteran utilityman John Boccabella caught most of the games early-on, with Bateman only making 5 starts in mid-May.

On June 14th, he was traded (inexplicably straight-up) to the Phillies for catcher Tim McCarver. (!?!?!?) A few years ago, I asked long-time Philly sportswriter Stan Hochman if he recalled the circumstances around that trade. Why would the Phillies possibly trade a quality catcher in McCarver for Bateman, who on his best days was merely serviceable? Especially in the midst of Steve Carlton’s magical 27-10 season? Who messes with that chemistry? And for what? Hochman couldn’t recall the reasons for the trade.

Bateman finished up his career with the Phillies in the summer of ’72, and was released the following spring. He played with The King and His Court softball team from 1977-80.