Here is Paul Doyle's rookie card. Doyle only had one other Topps card, found in the 1972 set.

I have no recollection of Paul from back in the day, and would probably have skipped blogging about him altogether, had he not appeared high on my "Oldest living players from 1966-1970 not blogged yet" list.

As a kid, I only collected cards from 1967-69 and 1972, and only got his 1970 card a few years ago. I DID have his 1972 card that year (having collected all the '72 cards in 1972 except for Bill Russell) but he was a virtual unknown then. (That he played for an American League team 3000 miles from Philadelphia didn’t help him enter my card-collecting consciousness.) 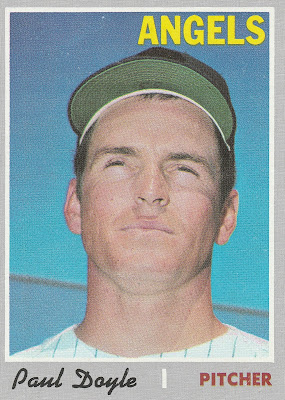 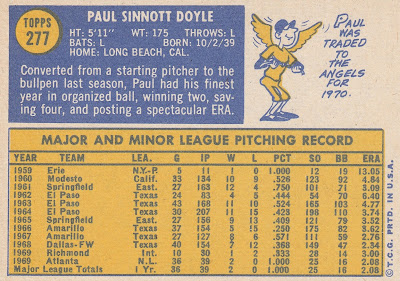 Doyle was signed by the Tigers in 1959, and languished in the minors for 9 seasons (hitting the Tigers', Yankees', Giants', Astros', and Braves' organizations) before making his MLB debut with the Braves in May 1969. Although primarily a starting pitcher in the minors, he was strictly a reliever in his 87 career major-league games.

He pitched in 36 games in his rookie season, then was sold to the Angels in late-November.

In 1970 he appeared in 40 games out of the Halos’ bullpen, then was sold to the Padres in late-August 1970. He only pitched 7 innings over 9 games with San Diego in the season's final weeks, and spent all of 1971 in the minors.

Reacquired by the Angels prior to the 1972 season, Paul appeared in 2 games over the first month, and that was it for his career. He didn't play in the minors during 1972, so it is unclear if he was released in early-May, or missed the remainder of 1972 due to injury.
Posted by Jim from Downingtown at 10:59 PM No comments: