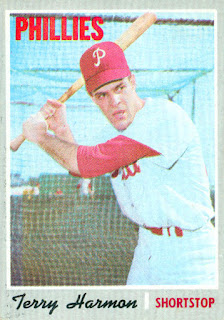 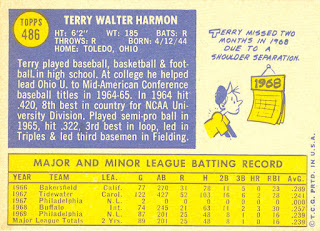 Terry played four more seasons with the Phillies, but with his starts cut way back. Dave Cash was the team's regular 2nd baseman from 1974-76, making a backup all but unnecessary. Harmon retired after the 1977 season.
Posted by Jim from Downingtown at 10:04 PM 1 comment: 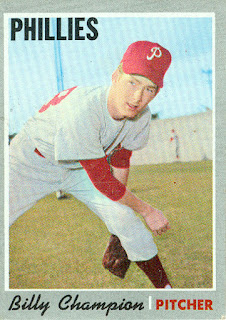 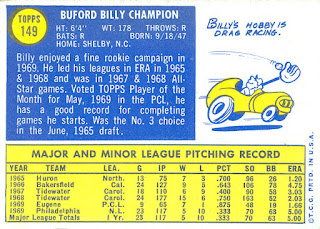 John Briggs was first of several young outfielders developed by the Phillies' farm system in the mid-1960s (along with Alex Johnson, Adolfo Phillips, and Larry Hisle). Although Briggs' Phillies' career began before, and ended after, the other three players, like all of them he found his greatest success after leaving the Phillies.

Johnny was signed by the Phillies late in 1962, and spent just one season (1963) at class-A Bakersfield before becoming a full-time major-leaguer at the start of 1964. Briggs was primarily used as a left-handed pinch-hitter during his rookie season, but also played 20 games in the outfield. He accumulated 66 at-bats in 61 games that season. 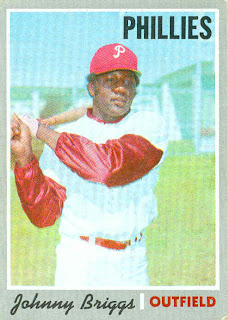 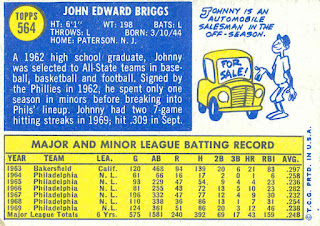 His role expanded in 1965, as he shared the starting center field duties evenly with another lefthander, Tony Gonzalez. Briggs ended up with the 4th-most innings played by the outfielders, due to Gonzalez' significant playing time in left field.

1966 was more of the same for Briggs, although in addition to Gonzalez, he was now sharing center field with veteran Jackie Brandt and, to a lesser extent, utilityman Cookie Rojas.

In 1967 Briggs moved over to left field, and began the season in a strict platoon with rookie SS-OF Gary Sutherland. By mid-season, he had moved back to center field, and platooned with Don Lock, while Lock's former platoon partner Gonzalez became the full-time left fielder.

1968 brought some change to the familiar Phillies' outfield routine. Richie Allen, fresh off a wrist injury that ended his 1967 season (and never a defensive whiz at 3rd base anyway) moved to left field fulltime for 1968. With veteran Johnny Callison in right, this threw everyone else (Briggs, Gonzalez, and Lock) into the center field mish-mash. Previously always a center fielder or left fielder, Briggs also spent most of July as the starting 1st baseman (replacing veteran Bill White) and part of August as the regular right fielder, since Callison missed several weeks in late summer.

The logjam worked itself out in 1969, as White was dealt back to the Cardinals, Gonzalez was lost in the expansion draft, and Allen moved in to play 1st base. With rookie Larry Hisle scheduled to take over the center field job, that left Briggs in sole possession of left field. Well, that plan was sidelined by rookie Ron Stone, who tore up the Grapefruit League in March. Stone began the season in left field, sending Briggs to the bench. The spring phenom's inevitable cool-off sent Briggs back to left, until he was replaced by Deron Johnson. Only Johnson's trip to the DL, followed by Allen's month-long suspension in mid-summer got Briggs back into the left field starting job.

Briggs and Stone shared the left field job during 1970, then Johnny was traded to the Brewers in April 1971 for 2 minor-leaguers.

He was a full-time regular with Milwaukee for 4 seasons, hitting 21, 21, 18, and 17 homers during that time. After playing 1st base for all of 1971, he moved out to left field to make room for George Scott. John began the 1975 season as the Brewers' left fielder, and after a mid-June trade to the Twins, he finished out the season (and his MLB career) as Minnesota's 1st baseman.

Briggs played the 1976 season in Japan, before retiring.
Posted by Jim from Downingtown at 3:48 PM No comments: