Gil Garrido is another one of those players (like Tom Timmermann and Paul Doyle) that didn’t play much (or at all) in the 1960s, and I probably would not have blogged about him had he not showed up on my list of “oldest players not yet blogged”.

I did learn 2 things from this card. 1) Garrido first played for the Giants back in 1964 (news to me), and 2) Topps misspelled his first name on the front of the card. (It’s spelled correctly on the back.)

Garrido was signed by the Giants in 1960, and had a 14-game stint with them from late-April to mid-June 1964, starting 7 games at shortstop. Then it was back to the minors for 4 years. 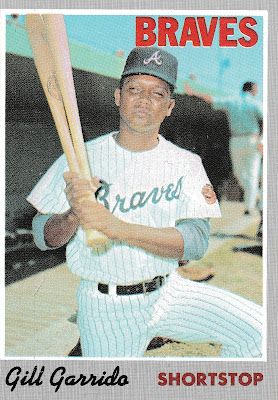 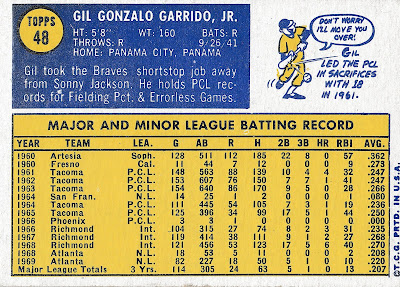 A May 1966 trade sent him to the Braves, and he was promoted in late-August 1968 where he started 14 games at shortstop over the final 5 weeks of the season. Was he auditioned for the job? Maybe so. He made the Braves from the get-go in 1969, and for the next 2 seasons, he and Sonny Jackson split the shortstop duties about evenly.

That arrangement ended in 1971, when rookie shortstop Marty Perez sent Jackson to center field and Garrido to the bench. Gil hung on for 2 seasons as a backup infielder, then played for the Braves’ AAA team in 1973 before retiring at the ripe old age of 32.

Posted by Jim from Downingtown at 8:39 PM No comments: