This is Tom Hilgendorf's rookie card. On the back, it shows that he made his major-league debut in 1969, pitching only 6 games (and 6 INNINGS!) To which I say "Why does he have a card?" Surely he only rates half of a Cardinals Rookie Stars card?

I'm also labeling this post as "new to me", because back in the day I only collected cards from 1967-69, and also in 1972. Either he wasn't in the 1972 set, or I wasn't paying attention to relievers on teams I didn't follow. So I was not aware of Tom for many years. I got this card just a few years ago as I was building the 1970 set prior to starting this blog.

Truth be told, my first awareness of him was when I got his 1976 Phillies card sometime in the 1980s, while I was completing my 1964-present run of Phillies cards. Still, although I followed the Phillies closely from 1967 to the mid-1980s, I have absolutely no recollection of him pitching 53 games for Philly in 1975. (Surprising, because I DO remember many forgettable appearances by Phillies' relievers Mike Wallace, Dave Wallace, Ron DiOrio, Frank Linzy, John Montague, Ed Farmer (in his 1st go-round), Jesus Hernaiz, Pete Richert, and George Culver.) 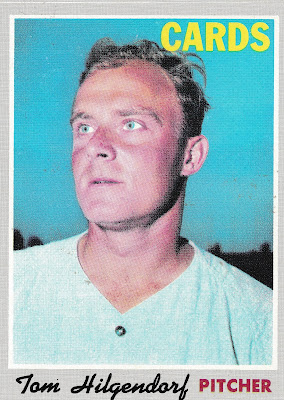 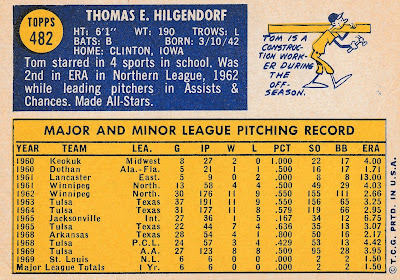 Anyway, Tom began his career in the Cardinals' organization way back in 1960. After 6 seasons on the farm, he missed the '66 and '67 seasons.

Hilgendorf returned to the Cards' organization in 1968 and made his major-league debut in August 1969. In both 1969 and 1970, he played for the Cardinals and for their AAA team.

Tom began the '72 season in the minors but was traded to the Indians in mid-June. He pitched 19 games for the Tribe in the second half. From 1973 to 1975 he managed to stay out of the minor leagues. Tom was the Indians' top man in the bullpen in 1973, leading the relievers in innings pitched and saves (6). In '74 he dropped to the #4 reliever slot.

During spring training in 1975, he was traded to the Phillies for a minor-leaguer and spent his final MLB season pitching 96 innings (all in relief) slotted behind Tug McGraw and Gene Garber.

The Phillies released him the following April, and although he was picked up by the Pirates, he played the 1976 season in triple-A before retiring.
Posted by Jim from Downingtown at 10:12 PM No comments: 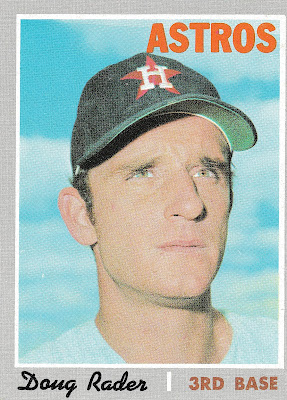 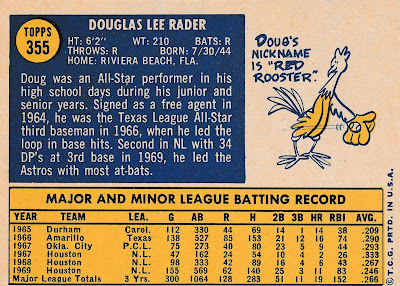 Posted by Jim from Downingtown at 1:41 PM No comments: