Sal Bando is often obscured by Reggie Jackson’s shadow when we remember the A’s teams of this era. This is Bando’s first card appearing as an Oakland A. He was on an Athletics Rookie Stars card in 1967, followed by 2 capless photos in ’68 and ’69 as the Athletics relocated to Oakland.

Bando was drafted in the 6th round by the Athletics in 1965 (5 rounds after selecting his college teammate Rick Monday) and played 3 seasons in the minors. He also appeared briefly for Kansas City in September 1966 and in 1967 from mid-May to mid-June, and again in September. 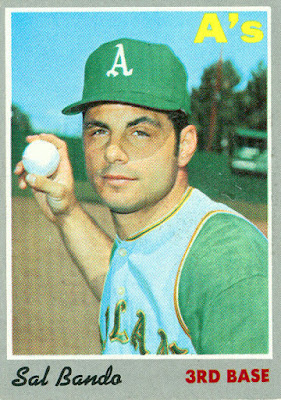 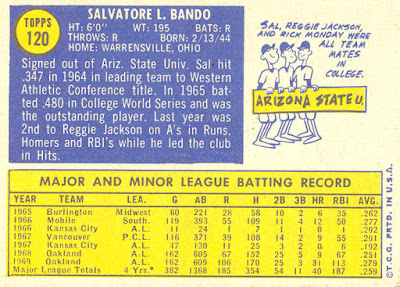 When veteran Ed Charles was traded to the Mets in May 1967, Bando got his first shot at the 3rd base job. A month later he returned to the minors while the A’s filled in with Danny Cater and Dick Green, but Sal returned in September and locked down the 3rd base job starting on September 8th.

Granted free agency after the 1976 season, Bando signed with the Brewers and played 5 additional seasons there – the first 3 as their regular 3rd baseman.

His brother Chris was a catcher for the Indians in the 1980s.
Posted by Jim from Downingtown at 10:50 AM 2 comments: