The Long and Winding Road

And so, the last of my seven set blogs shuts down today. I have had a lot of fun doing this since I started in September 2009, but I must admit the last year or two has felt more like work than fun.

Posted by Jim from Downingtown at 4:58 PM No comments:

Here are the AL ERA, Wins, and Strikeout leaders for the 1969 season.

ELEVEN starting pitchers had an ERA under 3.00! What gets ignored on the card front are the relievers, but the back shows that Angels' reliever Ken Tatum had an ERA of 1.36, and two others were lower than Dick Bosman's "league leading" mark.

All six 20-game winners are shown on the middle card, with Denny McLain in his final year of glory.

Sam McDowell leads the league for the last time (and 4th time in the past 5 years!) Mickey Lolich is right behind him, but Andy Messersmith finished a distant third, 60 strikeouts behind Lolich.

The Orioles are well-represented with Mike Cuellar (twice), Jim Palmer (in his comeback season), and Dave McNally. We also have two Twins (Dave Boswell and Jim Perry, but surprisingly not Jim Kaat) and two Tigers (McLain and Lolich).

Posted by Jim from Downingtown at 11:00 AM No comments:

Here are the AL Batting Average, RBI, and Home Run leaders for the 1969 season.

On their way to the inaugural AL West title, the Twins also snared the Triple Crown, though it took two players to do it. For good measure, teammate Tony Oliva finished 3rd in the batting race.

Boog Powell and Frank Howard made frequent appearances on these cards in the late-60s/early-70s.

The other Reggie (Smith) was not one of the usual players you would think of for the batting title.

I was so pleased with the 16 cards from a recent purchase, that I jumped right back into the pool and bought 10 more cards. I now need only 12 to complete the set.
I have my suspicions that the Norm Cash card may be a counterfeit or reprint.  The card stock feels the same as the others, but the front is a darker gray, the back is a brighter white, and it was unexpectedly inexpensive for a 50-year-old Norm Cash card. 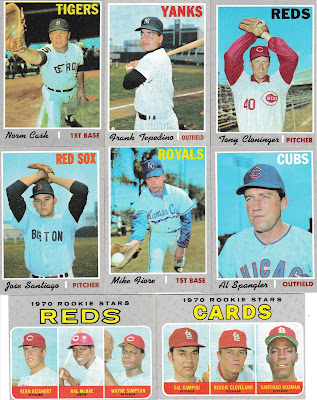 (Felix Millan and Ted Kubiak are still on their way)
This is my first card of Frank Tepedino, and possibly Mike Fiore too (unless he's in the 1972 set).
Still needed to complete the set are these cards:
Posted by Jim from Downingtown at 11:55 PM 2 comments:

Last week I emerged from my pandemic hibernation and bought some baseball cards for the first time in almost 2 years. I snared 16 vintage 1970 cards on my want list, which leaves me with only 22 cards to complete the set. 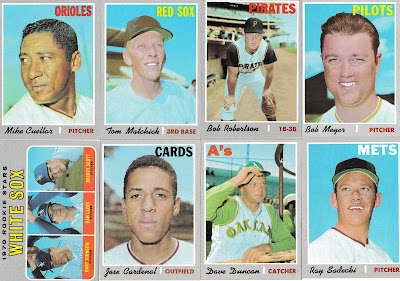 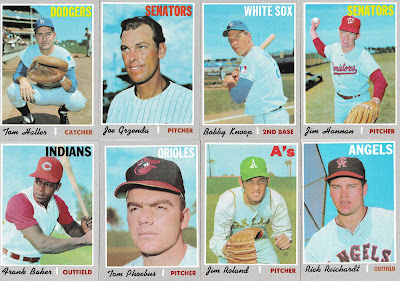 Almost all the remaining cards I needed were high numbers. Joining my binder are #590 Mike Cuellar, and these 15 high numbers:
Still to go are these cards:
What’s that you say? That’s only 15 cards? Oh yeah, these 7 also:
I have no expectations that I will get those last 7.
Posted by Jim from Downingtown at 12:52 PM No comments: 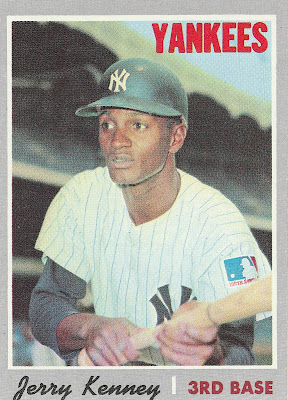 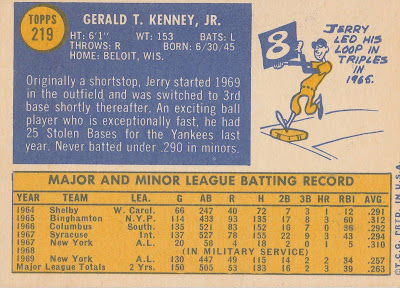 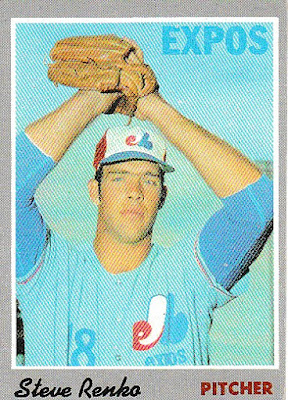 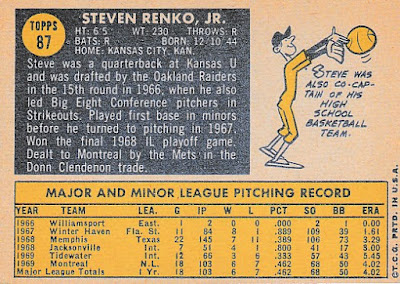 Roger Nelson had a 9 (essentially 6) year career from 1967-76, mostly with the Kansas City Royals.
Nelson was signed by the White Sox in 1963, and played 5 seasons in their farm system, culminating with a cup of coffee for the Sox in September 1967, where he pitched 7 innings over 5 games.
After the season Roger was included in the deal that sent Don Buford and Bruce Howard to the Orioles in exchange for Luis Aparicio, Russ Snyder, and John Matias. 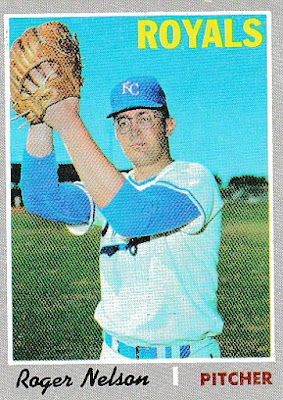 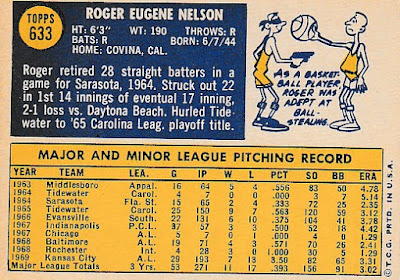 Nelson was with the Orioles for the entire 1968 season, but only pitched 19 games.
He and Wally Bunker were not only the 2 youngest pitchers on the 10-man staff, but also made the least amount of appearances as they swung back and forth between 5th starter and occasional reliever. (The O’s had Dave McNally, Jim Hardin, and Tom Phoebus at the front of their rotation, with Gene Brabender and Dave Leonard as the primary swingmen filling the 4th starter’s slot. Eddie Watt, Moe Drabowsky, and Pete Richert were the 3 primary relievers, so there wasn’t much for Nelson or Bunker to do.)
Left unprotected in the October 1968 expansion draft, Nelson was selected by the Royals (as was his O’s teammate Bunker). Together they headed up the starting rotation for the new Royals team. (Nelson made 29 starts, and was the only one of the 16 pitchers used by KC that season who made no relief appearances.)
Injuries limited him to 4 games in 1970 and 13 games in 1971. He returned to full-time duty in 1972, making 19 starts (3rd on the team) and 15 relief appearances while posting a 11-6 record and a 2.08 ERA.
In November 1972 he was traded to the Reds (with outfielder Richie Scheinblum) for pitcher Wayne Simpson and outfielder Hal McRae. Roger pitched for the Reds for 2 seasons, appearing in 14 games each year as a small cog in the Big Red Machine.
Nelson was sold back to the White Sox after the 1974 season, but he was released during spring training the following year. The Athletics took a flyer on him, but after 20 games with their AA team, he was released in early-August.
The Royals picked him up in April 1976, and he played most of ’76 and all of ’77 with their AAA team, making his final 3 MLB appearances with Kansas City in September 1976.
Roger played for the Pirates’ AAA team in 1978, and in Mexico in 1979 before retiring.
Posted by Jim from Downingtown at 1:42 PM 3 comments: