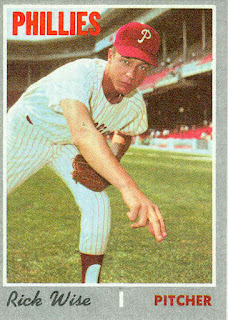 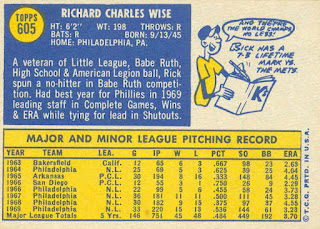 Posted by Jim from Downingtown at 11:16 PM 4 comments:

Here is Larry Hisle's first solo card. He previously appeared on an NL Rookies card in 1968, and a Phillies Rookies card in 1969. Too bad Topps couldn't get a better picture of the centerfielder on their all-rookie team, who played the entire 1969 season with the Phillies. 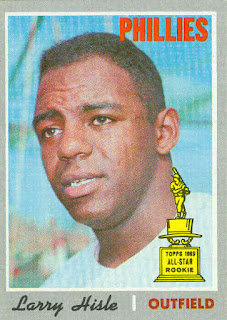 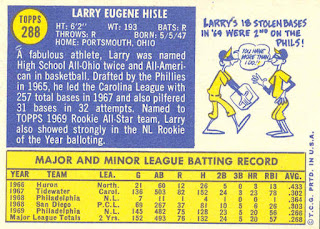 Hisle's early major-league career followed that of teammate (and previous post subject) Don Money. Like Money, Hisle was handed a starting job in spring training 1968. They both made their major-league debut in the '68 season opener. Like Money, Larry faltered and was sent back to triple-A in late April. Like Money, Hisle re-booted his career in 1969, snaring a starting position vacated by a player lost in the expansion draft, and played well enough to earn a Topps all-rookie team slot.

Larry was signed by the Phillies in 1965, and began playing ball in 1966 with the Phillies' low-A team in Huron, SD. The following year he advanced to high-A Tidewater, where he clubbed 23 homers and hit .302 in 136 games. This earned him a (rushed) trip to Philly in 1968. After 7 games with the Phillies in '68, he was sent back to triple-A San Diego, where he finished the season with a .303 average but only hit 6 home runs.

Larry's big years with the Phillies were 1969 and 1970. He took over the starting center field job on opening day, and started 124 of the first 129 games there. Following that, he shared the position with veteran Johnny Briggs during the month of September.

1970 was a little less stable for Hisle. After starting the first 29 games in center, he moved over to right field while Oscar Gamble and others got their shot there. By mid-June, he was spending a lot of time on the bench, then strung together a series of starts in center field in July and again in August. By season's end, Larry logged more playing time than the other outfielders, but there were 5 players in the starting outfield rotation.

1971 brought a lot of change to the Phillies' outfield. Rookies Willie Montanez and Roger Freed won the center and right field jobs, so everyone else (Hisle, Briggs, Gamble, Ron Stone, and Byron Browne) was thrown into the left field mix. Hisle only played 36 for the Phillies that season, while playing 62 games in triple-A.

After the season, he was traded to the Dodgers for 1st baseman Tommy Hutton. Larry spent the entire 1972 season in the minors, then in late October was traded to the Cardinals, who flipped him to the Twins a month later.

Larry was granted free agency after the 1977 season, and signed with the Milwaukee Brewers. In his first season there he collected 600 at-bats, 34 home runs, 115 RBI, and an all-star appearance. The next 4 seasons he was relegated to part-time playing roles, retiring on May 6, 1982 after appearing in only 9 games.
Posted by Jim from Downingtown at 10:22 PM No comments: