William James "Gates" Brown spent his late-teen years in prison on a burglary charge, and while playing ball for the prison team, he was spotted by a Tigers' scout and was signed in 1960. After 3 ½ seasons on the farm, he made his major-league debut in June 1963.

Brown was the ideal player for the designated hitter position, but unfortunately that didn't exist until his career was winding down. Except for 1964, Gates was used mostly as a pinch-hitter and backup left fielder during his first 10 seasons. In '64, he was the Tigers' regular left fielder, starting a career-high 106 games there after Rocky Colavito was traded away the previous winter.

Willie Horton joined the Tigers on a fulltime basis in 1965, taking the left field job away from Brown for good (clubbing 25+ home runs and 100+ RBI in each of his first 2 seasons). Horton also made his first of 4 All-Star teams as a rookie. 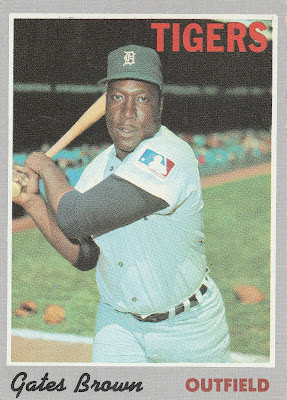 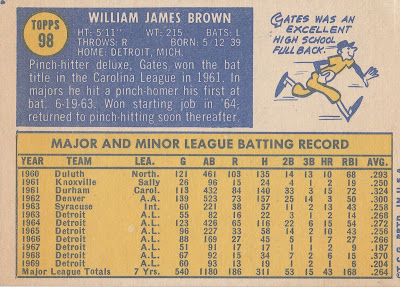 Brown was relegated to pinch-hitting and occasional play in left field through the 1972 season, although he did start 56 games in '71 and 72 games in '72.

There's a funny story that, since Gates spent a lot of time on the bench, he had his fair share of in-game hot dogs. From Wikipedia:

On August 7, 1968, Brown wasn't in the starting lineup, and decided to grab two hot dogs from the clubhouse. He was ordered by manager Mayo Smith to pinch hit, so he stuffed the hot dogs in his jersey to hide them from his manager.

"I always wanted to get a hit every time I went to the plate. But this was one time I didn't want to get a hit. I'll be damned if I didn't smack one in the gap and I had to slide into second—head first, no less. I was safe with a double. But when I stood up, I had mustard and ketchup and smashed hot dogs and buns all over me. The fielders took one look at me, turned their backs and damned near busted a gut laughing at me. My teammates in the dugout went crazy."

After fining Brown $100, Smith said, "What the hell were you doing eating on the bench in the first place?" Brown replied, "I decided to tell him the truth. I said I was hungry."

The DH was instituted in 1973, suiting Brown just fine. Unfortunately, that would last only 1 season, as veteran Al Kaline became the DH in 1974, and with Ron LeFlore playing fulltime in 1975, Horton slid over to the DH role that season.

Brown whiled away his final 2 years on the bench, seeing action in 120 games over that 2-year span, all as a pinch-hitter.