Bill Butler burst onto the scene in 1969, as a member of the Royals’ starting rotation. After a fine rookie season, his career began to sputter, and was over in a few years.

Butler was drafted by the Tigers in 1965, and spent 4 seasons in their minor-league system. After the 1968 season, Bill was the 11th player selected by the Royals in the expansion draft. 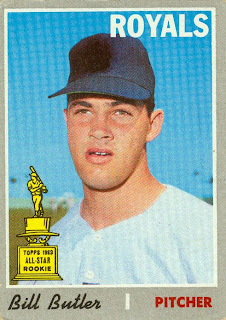 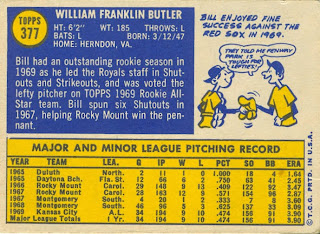 He made his major-league debut by starting the 5th game in Royals’ history in April 1969. By the end of that first season, he had made 29 starts, tied with Roger Nelson for 2nd place behind Wally Bunker’s 31 starts. Butler also led the staff with 156 strikeouts (26 more than the veteran Bunker).

In 1970 Butler (and Bunker) had off-years, with Butler slipping to 4-12 and only 75 strikeouts, while walking 87. The following season, he played 14 games for Kansas City and 13 games for their triple-A team in Omaha.

Butler was traded to the Dodgers after 1he 1977 season, and spent all of 1978 as a reliever for the Dodgers’ AAA team in Albuquerque, before retiring.
Posted by Jim from Downingtown at 4:01 PM No comments:

Before I head off down the path of the 1969 Topps All-Rookie team, one last look at the 1970 cards featuring players hanging out at the bat rack: 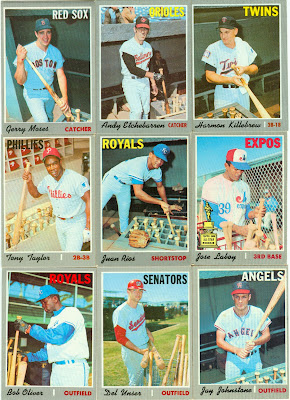 Tony Taylor and Del Unser each had 2 stints playing for the Phillies. Their first was as a starting player, and their second was as the team's go-to pinch-hitter. 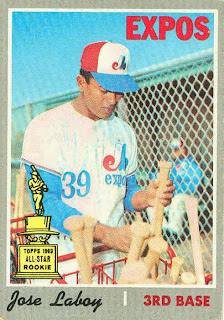 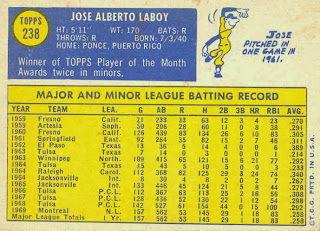 After his baseball career, Laboy returned to Puerto Rico and worked for the government for 27 years, eventually becoming the director of athletics for Puerto Rico.
Posted by Jim from Downingtown at 10:38 AM 3 comments: