Here is Cesar Tovar, the Minnesota Twins' jack-of-all-trades. Tovar has played all 9 positions, including every position in a game on 9/22/1968. (The Twins were in 7th place, 26 games behind, so a publicity stunt was in order.) Tovar began the game as the pitcher, then moved around the diamond in sequence (C, 1B, 2B, SS, 3B, LF, CF, RF) playing 1 inning at each position.

That was the only time he played at P, C, and 1B, but he has played more than 75 games at each of the other positions. He was primarily a 2nd baseman until the arrival of Rod Carew in 1967, then moved to 3B and  the outfield.

Tovar was signed by the Reds in 1959. After 6 years in the minors he was traded to the Twins in December 1964 for pitcher Gerry Arrigo.

Tovar made his big-league debut in April 1965, but after 9 games was sent back to the minors for the rest of the season. He was recalled in September and saw action in 9 more games. 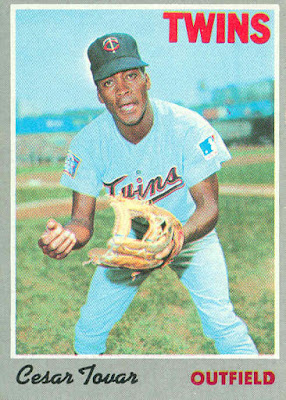 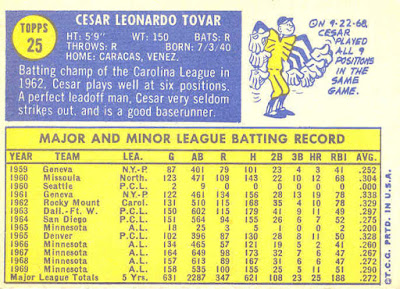 Cesar made The Show for good in April 1966. After riding the bench for the first 2 months, he started 73 games at 2nd base and 27 at shortstop as a rookie.

In 1968 he was all over the diamond, but was the team’s primary 3rd baseman, with 68 starts there. Tovar had more plate appearances in 1969 than all but four other Twins, but was not the main player at any one position.

After the 1969 season, center fielder Ted Uhlaender was traded to the Indians in a 6-player deal, opening up a regular spot for Tovar in the 1970 lineup. Cesar continued as one of the Twins' top 3 outfielders in '71 and '72.

He was traded to the Phillies prior to the 1973 season for 3 suspects, and started 39 games at the hot corner for the Phillies that year, easing Mike Schmidt into his rookie season.

After only 1 season in Philly, Tovar spent his final 3 seasons bouncing around between the Rangers, the Athletics, and the Yankees.

He played in Mexico in '77 and '78, and for his hometown Caracas, Venezuela in the Inter-American League in 1979.

That hole in the webbing of his glove is huge!