This post is about Chuck Taylor, not Chuck Taylors, But as long as I have your attention, behold the Holy Grail of sneakers from back in the day: 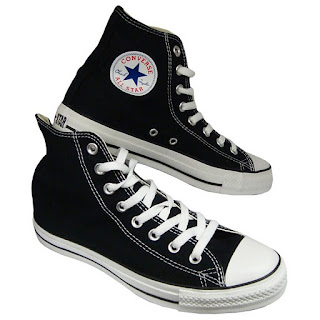 We always referred to these as "Converse All-Stars", not "Chuck Taylors" or "Chucks" as is done these days. I also recall that all the "cool kids" had these as early as elementary school, while the rest of us didn't catch up until jr. high (having been saddled with "sensible" sneakers like Keds or PF Flyers prior to that). The other thing I remember is that the only style that "mattered" was black hi-tops. Having white Converse sneex, or black low-tops just wasn't the same.

This is Chuck Taylor's rookie card, the first of his 6 consecutive cards.  He pitched for 8 seasons (1969-76), mostly for the Cardinals and Expos. Although he started half his games as a rookie, he was a reliever for the rest of his career.

Prior to the 1964 season, he was traded to the Houston Colt .45s (with outfielder Jim Beauchamp) for outfielder Carl Warwick. Midway through the following season, Houston returned him to the Cardinals (with pitcher Hal Woodeshick) for pitchers Mike Cuellar and Ron Taylor. 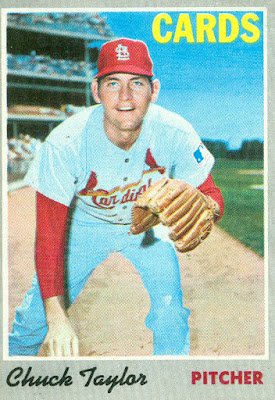 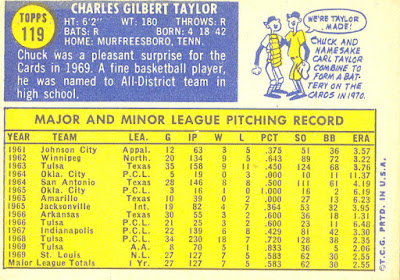 After a few games in AAA in 1969, Taylor was called up to St. Louis in late May. After spending 2 months in the bullpen, he joined the rotation and made 12 consecutive starts from late-July to the end of the season. Chuck appeared in 56 games in 1970 – all in relief except for 7 starts in June and July. He also led the team with 8 (!) saves that season.

During the 1971/72 off-season, he was part of a 4-for-4 trade with the Mets that included Beauchamp going to New York, and Jim Bibby and Art Shamsky going to St. Louis. Taylor split his time in 1972 between the Mets, their AAA club, and the Brewers.

The Brewers released him in spring training 1973, but he was quickly snapped up by the Expos. Chuck pitched for Montreal for 3 full seasons and part of 1976, also playing for the Expos’ AAA team for part of 1976.  He retired after the season.
Posted by Jim from Downingtown at 10:05 PM