Palmer was the Phillies' #1 draft pick in 1966, and made his major-league debut in June 1969. He started 9 of 26 games during his rookie season. Lowell spent the entire 1970 season with the Phillies, pitching mostly in relief (along with 5 starts). His 102 innings pitched was 8th among the staff.

In 1971, Palmer was back in triple-A for most of the season, only pitching 3 games for the Phillies, all in late-June. 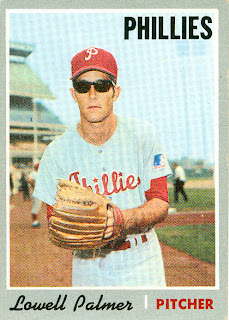 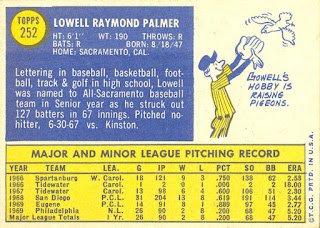 After the '71 season, he was sold to the White Sox, who kept him long enough for him to get a card in the '72 set. Palmer was released on May 16th, then picked up the same day by the Cardinals. He was up and down with St. Louis for a few months, then claimed by the Indians in mid-September.

Palmer spent the 1973 season in the minors, first with Cleveland then the Yankees. In May 1974, the Yankees sold him to the Padres, where he resurfaced in the majors for 22 games.


This is the final post in my cross-blog series of the 70 players (with cards) appearing for the Phillies from 1966 to 1969.

Posted by Jim from Downingtown at 10:37 PM

He had a great strikeout to innings pitched ratio in the minors. I wonder if the dark glasses was a "scare the heck out of the batter" thing.

I played with Lowell. Lowell needed the sunglasses for some sort of eye stigmatism. He was quite a character and, when on, he threw as hard as anybody!

Lowell's minor leagues stats were not unlike many Phillie farmhands at the time; they had good teams in SD then Eugene. The problem was consistent good play at the MLB level or at least with the parent club.

This card is one of most memorable in childhood because the sunglasses made it so different. Up there with the 1972-73 Keith Maguson, a hockey card taken using a fish eye lense.