Deron Johnson was acquired by the Phillies in 1969. His big bat was the reason Phillies' 1st base prospect Greg Luzinski moved to left field when he came up in 1971.

On the first Deron Johnson card I got (1967), his position was listed as "INF-OF", a designation usually reserved for utility schmoes like Jim Stewart, Frank Kostro, and Jim Barbieri. Johnson was clearly not a utility player, but was a regular at 3 different positions (1B-3B-LF) in rapid succession, and led the NL with 130 RBI in 1965.

Johnson was signed by the Yankees in 1956 and played 5 seasons in their minor-league system, the last 3 in triple-A. Deron started as an outfielder, but in his last 2 minor-league seasons, played as much at 3rd base as in the outfield. He made his major-league debut in September 1960, and played a half-dozen games at 3rd base that season. 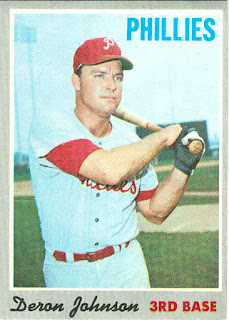 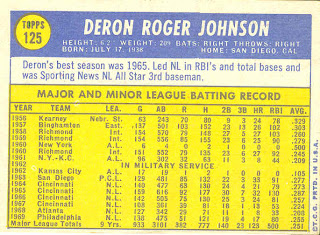 Johnson began the 1961 season with the Yankees, but after only playing in 13 games (3 starts) by mid-June, he was traded to Kansas City (as many Yankees were in those days) with veteran pitcher Art Ditmar for pitcher Bud Daley. Johnson spent the remainder of 1961 as a swing man between LF, RF, and even some 3B, playing in 83 games for the Athletics. He missed most of the 1962 season while in military service, playing only 17 games that season (almost all in August).

The Cincinnati Reds purchased Johnson in April 1963, and he spent the entire season at triple-A San Diego (maybe for a refresher course on "good baseball" after almost 2 years in Kansas City?). Anyway, he led the PCL with 33 home runs and was the league's all-star 1st baseman.

After the season he was traded to the Braves for a bag of beans pitcher Jay Ritchie and outfielders Mack Jones and Jim Beauchamp. After one season in Atlanta, he was sold to the Phillies.

With Dick Allen already at 1st base, Johnson alternated between left field and 3rd base, before taking over at 1st base following Allen's off-season trade. Deron had two excellent seasons in '70 and '71, clubbing 27 and 34 home runs along with 93 and 95 RBI.

Injuries limited him to 96 games in 1972, and in May 1973 he was traded to Oakland for a minor-league catcher. Johnson played 4 seasons in the American League as the designated hitter and sometimes first baseman for Oakland, Milwaukee, Boston, and Chicago before being released in June 1976.

He later coached for several teams, including the Phillies and Angels. Johnson died of lung cancer in 1992 at age 53.
Posted by Jim from Downingtown at 11:15:00 AM

As 1970 was my rookie year collecting, this series was very special to me. This was a favorite of mine, first, because I'd never heard of a "Deron" before, and second, in this photo anyway he looks like William Shatner!