Jim Bunning returned to the Phillies in 1970, after a 2-year hiatus. He was the team's opening-day pitcher in 1971, the first-ever game at Veterans Stadium.

1957 was Jim's first full season in the majors, and he marked the occasion by winning 20 games, leading the AL with 267 innings pitched, and making his first of 7 all-star appearances. Bunning starred for the Detroit for 6 more seasons, twice leading the AL with 201 strikeouts.

After the 1963 season he was traded to the Phillies with catcher Gus Triandos for outfielder Don Demeter and pitcher Jack Hamilton. 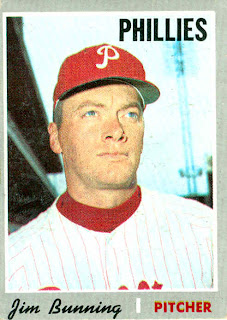 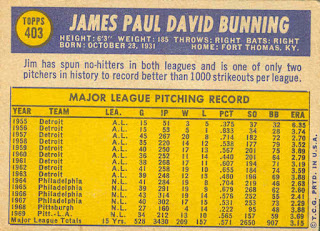 Jim was the Phillies' ace for the next 4 seasons, winning 19 games 3 times. During his 1st season in Philly, he pitched a perfect game against the Mets on Fathers' Day. He won 17 in his final season, then moved on to the Pirates for 4 players, including pitcher Woody Fryman and shortstop prospect Don Money.

After two off-years in Pittsburgh and Los Angeles, Bunning returned to the Phillies for 2 seasons before retiring after the 1971 season at age 39. (The Phillies would acquire Steve Carlton months later.)

Bunning spent some time managing in the Phillies' farm system before entering politics. He was a congressman, then a US Senator from Kentucky from 1987 to 2011.

Normal orbits will resume shortly, except for this 1970 blog, which will feature Phillies for the next few posts.
Posted by Jim from Downingtown at 9:44:00 PM

The 1970 Bunning card was the only one I had of him. I've liked the card because it's at Connie Mack stadium (quite possibly the only 1970 individual card showing that stadium). I'm asmusing the pic was taken in Bunning's first stint with the Phillies, 1967 or before.

The 1970 Phillies' team card has a nice shot of Connie Mack. (See the first post on this blog.)

This IS from Bunning's 1st stint with the Phillies, because they changed uniforms and cap logos in 1970.