Watkins was drafted by the Detroit Tigers in 1963, and played in their farm system that year as a catcher. After the season, he was drafted by the Phillies, and played for 5 seasons in their minor-league system. He was an outfielder for his first 4 seasons there before switching back to catcher in 1968. Dave made his major-league debut on April 9, 1969. 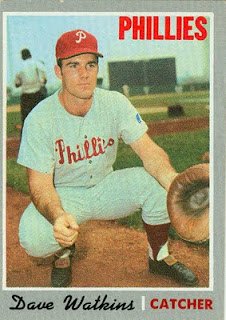 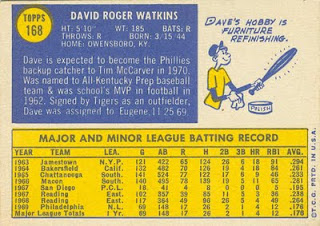 From 1964 to 1967, the Phillies only carried 2 catchers. In 1968 and 1969 they carried 3 catchers. I used to think this was due to differing philosophies of managers Gene Mauch and Bob Skinner, but I later realized it was because with Cookie Rojas on the team, a 3rd catcher wasn't necessary. (Rojas had played every position for the Phillies, including pitching 1 game in 1967, and making several appearances as an emergency catcher. True, Rojas was still on the team in '68 and '69, but by then he was firmly established as their #1 2nd baseman.)

Anyhoo, after the 1968 season, longtime regular catcher Clay Dalrymple was shipped off to the Orioles for rookie outfielder Ron Stone, so the #1 job belonged to Mike Ryan, who had shared it with Dalrymple in 1968. As a rookie in 1969, Watkins caught 54 games, starting 33 of them. He also played 5 games in the outfield.

The back of this card states that "Dave is expected to become the Phillies backup catcher to Tim McCarver in 1970." However, the last sentence says he was assigned to [triple-A] Eugene on 11/25/69. (This kind of note is usually a last-minute add-on to a card.)

Not only did Dave not back up McCarver in 1970, but he wasn't even one of the SIX catchers used by the Phillies in 1970. (During the 6th inning of a game with the Giants on May 2nd, a foul ball by Willie Mays broke McCarver's hand. He was replaced by Ryan, who had HIS hand broken later in the SAME INNING while applying a tag at home plate. Utilityman Jim Hutto finished out the game, but the next day the Phillies called up their 2 triple-A catchers Mike Compton and Del Bates, and also activated their bullpen coach Doc Edwards, a former catcher who last played in the majors in 1965. Neither Compton or Bates ever played in the majors before or after 1970.)

Where was Watkins during all of this? I don't know, maybe he went into the furniture refinishing business. He was out of baseball in 1970. It seems odd that after finally making it to the majors after 6 years in the minors, and getting a good amount of playing time, that his career would be over before the next season.
Posted by Jim from Downingtown at 8:58 PM