I never knew of Bob Garibaldi's existence until I got his card last year. This is due to him not having a card in the sets I collected back in the day (67, 68, 69, 72). After seeing his early-1960s stats on the card back, I was all ready to title this post "Back on Topps' radar", until learning tonight that this is Garibaldi's rookie card.

Bob was signed by the Giants in 1962 (right out of nearby Santa Clara University) and went directly to the majors, making his debut on July 15th. After fashioning a 5.11 ERA over 12 innings that season, Garibaldi spent the 1963 through 1970 seasons as a starting pitcher with the Giants' AAA teams (first in Tacoma, then in Phoenix), with only cups of coffee with San Fran in '63, '66, and '69. 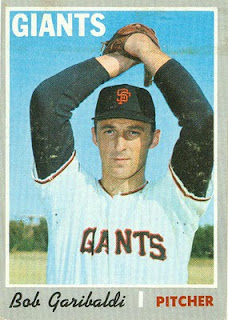 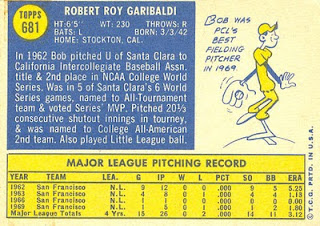 After the 1970 season, Garibaldi was traded to the Kansas City Royals for catcher Fran Healy (who now has a sports-interview show on TV). At the start of the 1971 season, Bob was traded to the Padres for a minor-league pitcher.

Not only did he not see Kansas City, he didn't see San Diego either, spending the 1971-72 seasons with the Padres' AAA team in Hawaii. Oh well, if you get sent to the minors, I suppose Hawaii is the place to be. Bob's only other baseball card was in 1971.
Posted by Jim from Downingtown at 9:35:00 PM 2 comments: