Today we have Phillies' backup catcher Mike Ryan. Although 1970 was Mike's 3rd season with the Phils, it was his first card featuring him in a Phillies uniform. It seems like Topps took it's time getting new photos for players that changed teams, preferring to stick with hatless photos well beyond their expiration date: 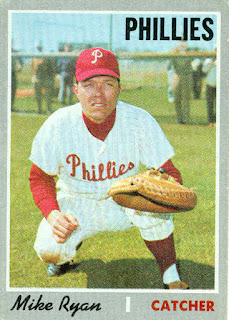 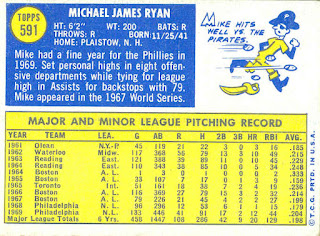 I first became casually aware of Mike Ryan by his 1967 card while a member of the AL champion Red Sox. After the season, the Phillies acquired him in exchange for pitcher Dick Ellsworth and catcher Gene Oliver. (The same day, they also traded Jim Bunning for 4 players, including Woody Fryman and Don Money.)

Great! I thought. After plodding along the previous season with a platoon featuring aging veterans Clay Dalrymple, Bob Uecker, and Gene Oliver, we're finally getting a young, up-coming catcher. Not so fast... Ryan platooned with Dalrymple for the '68 season, then took over as the regular backstop in 1969 when Dalrymple was traded to the Orioles. Although a great defensive catcher, Ryan couldn't hit a lick. (I guess that's implied when someone is referred to as "a great defensive catcher").

After one season at the controls, Mike returned to the bench in 1970, since former all-star and 2-time World Series champion Tim McCarver was acquired in the Dick Allen trade prior to the season. However, Ryan got a break when McCarver broke his hand on a Willie Mays' foul tip on May 2nd. Mike actually DID get a "break" later that same inning: breaking HIS hand while applying a tag at home plate. (The Phillies used 2 minor-league catchers and a hastily-reactivated bullpen coach to fill in for the next few months.)

Ryan caddied for McCarver through June 1972, then played behind John Bateman for the remainder of that season. In 1973, rookie Bob Boone took over as the #1 catcher. The team had acquired veteran Tom Haller from the Tigers to mentor Boone, but when Haller refused to report, they kept Ryan on for one more season.

After playing for the Pirates in his final season (1974), Mike returned to the Phillies as a minor-league coach for a few seasons, then as their major-league bullpen coach from 1980-1995.
Posted by Jim from Downingtown at 11:20:00 AM