Fred Lasher was a relief pitcher for the Tigers in the late-1960s, then pitched most of 1970 for the Indians.

He was signed by the (old) Washington Senators before the 1960 season, and played in the minors for the better part of the next 8 seasons.

Lasher appeared in 11 games for the Twins in April and September 1963, but didn’t resurface in the majors until mid-August 1967 with the Tigers. Fred picked up 9 saves in his 17 games over the final 6 weeks of the season. 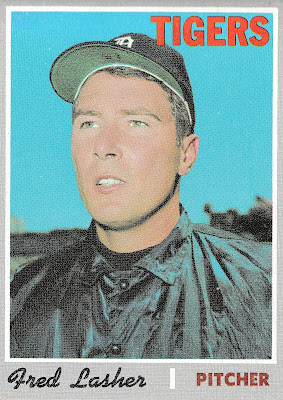 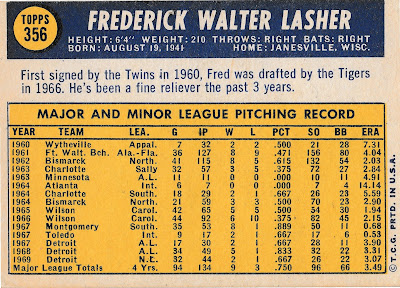 (According to the back of this card, the Tigers were in the National League in 1969. Was that a perk for winning the World Series?)

In his first full season (1968), he collected 5 saves, good for 3rd place among Tigers’ relievers. (It looks like they employed a closer-by-committee approach, as all 5 relief pitchers had between 2 and 7 saves.)

Lasher remained in the Tigers’ bullpen until May 1970, when he was traded to the Indians. He pitched in 43 games for Cleveland that year, but compiled a 1-7 record and a 4.06 ERA.

The Angels selected him in the Rule 5 draft following the 1970 season, but he spent most of 1971 pitching in triple-A, while playing only 2 games for the Angels. He was released a week before the 1972 season began.
Posted by Jim from Downingtown at 11:18:00 PM No comments: