This may just be my favorite Bill Robinson card (or at least of his non-Phillies’ cards). Just look at the intensity as he keeps his eye on the (virtual) ball. Plus, there’s the Yankee Stadium frieze in the background!

Robinson began his career in the Milwaukee Braves’ organization in 1961. His major-league debut came with Atlanta in September 1966.

After the season, he was traded to the Yankees for veteran 3rd baseman Clete Boyer. Robinson spent the next 3 seasons trying to fill the shoes first of Roger Maris (who was traded to the Cardinals in the same off-season), and Mickey Mantle (who retired after 1968). He appeared to be overmatched, having almost no pop in his bat, and batting under .200 in 2 of those 3 seasons. 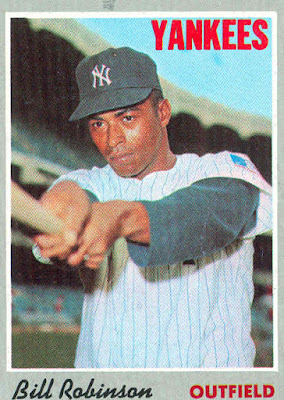 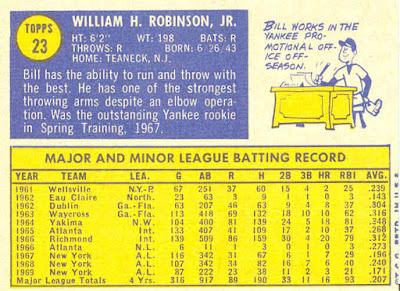 Here is where my interest in Bill Robinson began back in the day. After starting the ’72 season in AAA, Bill was brought up to Philadelphia in late June, and played in 82 games over the rest of the season. Although initially used in a right field mix of suspects, Bill was the team’s everyday centerfielder for the final month, after Willie Montanez moved in to 1st base following Deron Johnson's season-ending injury. I remember being happy for Robinson, that the Phillies had rescued him from the minors and his career was back on track.

In 1973 he started 55 games in right field, and 40 games in center field (spelling the newly-acquired Del Unser). He also made 11 starts at 3rd base, presumably to give Mike Schmidt and his .196 rookie-year batting average a rest on the bench. I can remember at the time Robinson hating to play the infield, because he was making too many errors and felt he was embarrassing himself. Mercifully, that experiment soon ended. Despite being moved around defensively, he clubbed a surprising 25 homers that season and hit .288 – finally achieving the potential the Yankees had hoped for several years earlier.

In 1974 he had similar results as in '72 and ’68 – single-digit home runs, and a sub.240 batting average. Robinson was a swing man in the outfield, but his larger problem was that in 1974 the Phillies had reclaimed another ex-big league outfielder from the minor-league scrap heap – Jay Johnstone. Johnstone would be the team’s regular right fielder from mid-1975 to mid-1977.

With Robinson expendable, he was traded to the Pirates during spring training 1975. Bill played for the Pirates for the next 7 1/2 seasons. I thought he was the Pirates' regular left fielder for a number of seasons, but it appears he was a backup outfielder for most of his time in Pittsburgh. In 1977 he split the 1st base starts with Willie Stargell, and was the primary left fielder in 1978.

By 1981, both Robinson and Stargell were bench players/pinch-hitting specialists. As aging veterans, they spent a lot of time sitting together in the dugout. I remember watching a Phillies/Pirates game in mid-1982 just after Robinson was traded back to the Phillies. The TV camera zoomed in on the Pirates’ dugout, and there was Stargell waving to Robinson across the diamond, an empty seat next to him that he left open for his old buddy, should he want to stroll over there for another chat.

Robinson played sparingly for the Phillies for the 2nd half of 1982, and the first half of 1983, then was released in mid-June ’83, ending his 16-year career.

He later coached for the Mets, Marlins, Yankees, and Phillies.