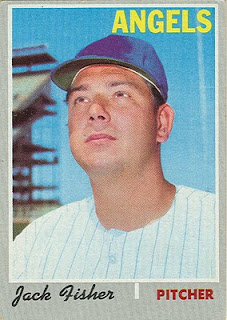 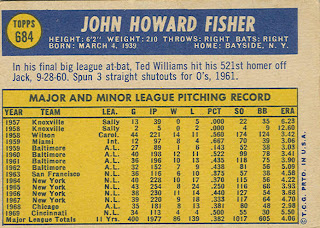 Dumb question Jim, but do you really like the look of this set?

After some really beauties in the 1960's I thought Topps started off the 70's in a rather dull fashion with this set.

The only thing I liked from this set were the All Star cards.

Actually, I don't like this set as much as the sets from 1965-69 (even the '68 set!). I collected it for several reasons, none of which were style-related:

2. Some new players:
With expansion in 1969, this 1970 set presents a batch of previously unseen players, AND, there's minimal airbrushed/hatless photos, compared to the 1969 set.

After reading #1 above, let me answer the next question. No, I won't be collecting the 1971 set. I don't like the backs at all: Green on green color scheme, and stats minimized to 2 lines (previous year, and career totals) to make room for the ridiculous 2nd photo on the back.

Correct me if I'm wrong, but didn't Fisher give up Ted Williams' final home run?

You are correct. Not only was it his final home run, but it was hit in the final at-bat of his career (8th inning of game #151)! Williams didn't play the last 3 games of the season.