Here is the final card for Jerry Adair (#525), not counting his appearance as a coach on Athletics’ manager Dick Williams’ card in 1973. Adair had his own card every year from 1961 through 1970.

Jerry was signed by the Orioles in September 1958 out of Oklahoma State University, and with the minor league season already completed, he played 11 games with the Orioles that month. 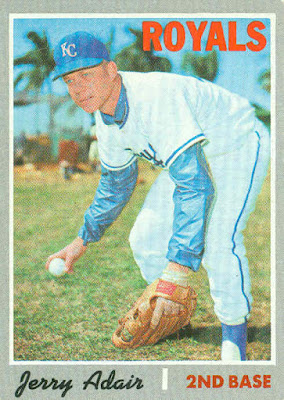 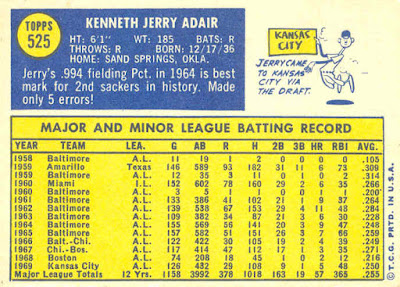 In ’59 and ’60 he played 1 season in AA and AAA (respectively), mostly as his team’s regular shortstop. Coincidentally, he made 638 minor-league plate appearances each season, and played a few games with the O’s each year.

Adair made the Orioles' squad at the start of the 1961 season, and started 96 games at 2nd base, to Marv Breeding’s 62 starts. (Breeding had been the incumbent for the previous season, starting 151 of the team’s 154 games.)

In 1962 he slid over to shortstop, starting 103 games there because Ron Hansen missed much of the season due to military service. Jerry still managed 29 starts at 2B.

The Orioles acquired shortstop Luis Aparicio from the White Sox prior to the 1963 season, so Adair was back to his 2nd base home for 100 starts, with Bob Johnson (newly-acquired from the Senators) starting 45 times.

Jerry started almost every game for Baltimore in 1964 and 1965. In 1966, rookie Dave Johnson won the 2nd base job out of spring training, and Adair (having only played 17 games so far) was shipped out to the White Sox in mid-June for pitcher Eddie Fisher. With regular shortstop (and former Orioles’ teammate) Ron Hansen missing the 2nd half of ’66 with a back injury, Adair once again filled in for Hansen.

In June 1967 he was traded to the Red Sox for reliever Don McMahon, and helped Boston get to the World Series, filling in for shortstop Rico Petrocelli, 3rd baseman Joe Foy, and 2nd baseman Mike Andrews. Jerry started 78 games over the 2nd half of the season, and started the first 4 games of the World Series.

Adair played all of 1968 with the Red Sox, but in a utility infield role. His only extended string of starts came in August, filling in for Petrocelli for several weeks. After the season, he was left unprotected for the expansion draft and was selected by the Royals.

He was the primary 2nd baseman for the upstart Royals in 1969, starting 105 games from day 1 until mid-September, when ex-Dodger Luis Alcaraz (who had spent most of the season in AAA) took over.

Jerry missed much of spring training 1970 with family issues, so the Royals began the season with Alcaraz at 2nd base. Adair started a few games in late April but was soon released, ending his 13-year career.