Nagy was signed by the Red Sox in 1966, and played 3 seasons in class-A ball before jumping to the majors to begin the 1969 season. As a 21-year-old rookie, Mike was 2nd on the staff in starts and innings pitched (behind Ray Culp), but had fewer strikeouts and more walks than the other 3 primary starters.

Nagy finished 2nd in the AL Rookie of the Year voting behind the Royals’ Lou Piniella, receiving 6 of the 24 1st place votes (to Piniella’s 9 votes). 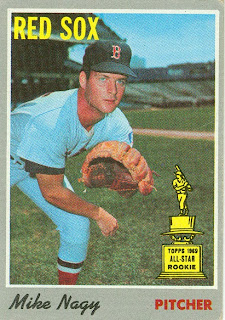 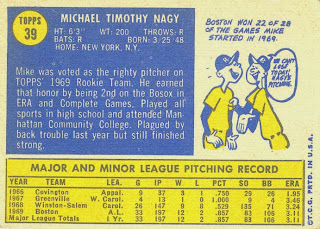 In 1977, Nagy started a still-operating real estate business in the Bronx.
Posted by Jim from Downingtown at 11:55:00 PM