Here’s centerfielder Del Unser, perusing the bat rack. (Actually, it looks more like the perennial second-division Senators “borrowed” a shopping cart from the local A&P for their bats.)

Unser came up with the Senators in 1968 and immediately took over the center field position, starting 153 games in his rookie season. He finished a distant second place in the Rookie of the Year voting to Yankees’ pitcher Stan Bahnsen. 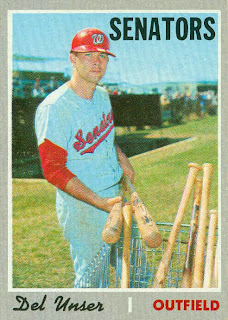 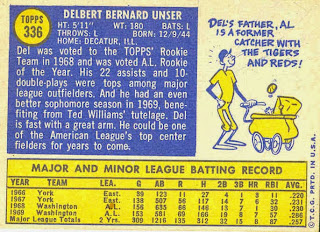 The following season he jumped to the majors out of spring training, and was Washington’s starting center gardener for the 1968 and 1969 seasons. After starting the first 11 games in 1970, Del was relegated to the bench for much of the season, only starting 21 games after April 27th, as Ed Stroud took over his position.

In 1971 Unser was back in the driver’s seat, starting 2/3 of the games in center, while the newly-acquired Elliot Maddox starting most of the other games.

Del was traded to the Indians after the 1971 season in an 8-player deal, but only lasted 1 season in Cleveland. A year later he was traded to the Phillies for outfielders Oscar Gamble and Roger Freed. [Oh, how I LOVED this trade back then! The Phillies were getting a bona fide center fielder in exchange for two stiffs that had worn out their welcome. It was one of the first deals by Paul Owens, who had taken over as Phillies’ GM in June 1972.]

Pushing 1971-72 center fielder Willie Montanez over to right field, Unser manned center field for the Phillies during the ’73 and ’74 seasons. After 1974, he was traded to the Mets (with reliever Mac Scarce and catching prospect John Stearns) for reliever Tug McGraw and 2 backup outfielders. (Obviously, McGraw made major contributions for the next half-dozen seasons.)

After a few seasons with the Mets and Expos, Unser returned to the Phillies in 1979, this time as a pinch-hitter extraordinaire. He played in over 90 games each in ’79 and ’80, but started less than a third of them. His value was now in his timely hitting (.298 in 1979). After 2 more seasons with the Phillies, Del retired after the 1982 season.

Unser has worked off-and-on for the Phillies since then, most notably as a batting coach and minor-league instructor.

Why does the back of the card say he was AL ROY? Delbert was second to Stan Bahnsen, wasn't he? Did they mean Topps ROY?