Billy Wilson was one of several so-so pitchers promoted by the Phillies from their farm system in the 1969-71 time period. This is Wilson's first solo card, but he appeared on Phillies Rookie Stars cards in the 1967 and 1969 set.

Wilson was signed by Philadelphia in 1961 (wow, I didn't realize he went that far back!) and played minor-league ball for EIGHT seasons before making his major-league debut in April 1969. Billy was a starting pitcher from 1961-63, but was converted to a reliever in 1964. He didn't reach the triple-A level until 1966, then regressed to AA in '67 before spending the entire 1968 season back in triple-A. 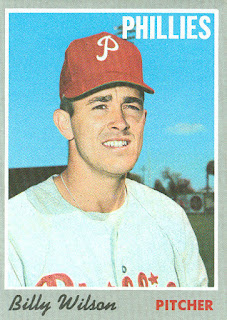 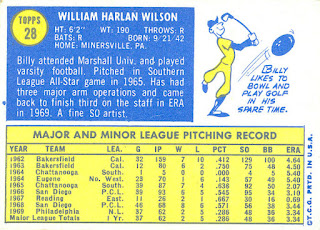 In 1971, he played 1/3 of an inning at 3rd base, as manager Frank Lucchesi brought in another pitcher to face 1 batter before returning Wilson to the mound. (The Phillies made a similar move in 2011 with Cliff Lee.)

Following the 1973 season, Wilson was traded to the Brewers for veteran reliever Frank Linzy, but  was released by Milwaukee in spring training. He caught on with the Phillies' AA team in Reading, PA for his last pro season in 1974.