Ellie Rodriguez was the starting catcher for some bad teams from 1969-75, thus staying pretty much under everyone's radar.

He was signed by the Kansas City Athletics in 1964. After 1 season in the minors he was drafted by the Yankees and played 3 full seasons on their farm.

Ellie made his big-league debut for the Yankees in 1968, playing 9 games (mostly in late-May and early-June), but spent most of the ’68 season with triple-A Syracuse, where he alternated at catcher with journeymen Hawk Taylor and Merritt Ranew. 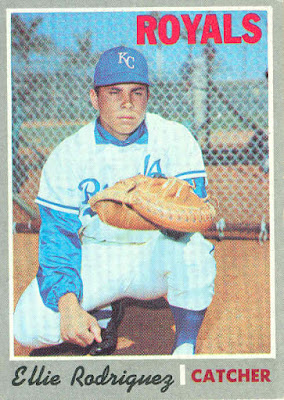 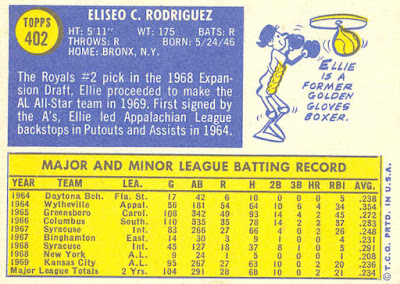 Rodriguez was selected by the Kansas City Royals as the 13th pick in the expansion draft prior to the 1969 season. He was their primary catcher in 1969 (making the All-Star team as a rookie), and split the catching chores in 1970 with ex-Angel Ed Kirkpatrick.

After the 1970 season Ellie was traded to the Brewers, and once again became his team’s #1 backstop. He was the regular for 2 seasons, and made the All-Star team in ’72. In 1973 he split the catching with rookie Darrell Porter, who had played briefly with Milwaukee in the previous 2 seasons. Porter started slightly more games than Rodriguez.

With Porter entrenched behind the plate, E-Rod was dealt to the Angels in the off-season. Accompanying him to California were outfielders Ollie Brown and Joe LaHoud, and pitchers Skip Lockwood and Gary Ryerson. In return, the Brewers acquired pitchers Steve Barber and Clyde Wright, outfielder Ken Berry, and catcher Art Kusnyer.

Rodriguez continued the pattern that was his career – two seasons as his team’s #1 catcher, then time to move on. However at this stop (Angels) there was to be no All-Star selection, despite 1974 being his best season with the bat (7 homers, 36 RBI).

Ellie’s final major-league season was in 1976, where he was a backup for the Dodgers. LA released him in May 1977 (having not played so far) and he spent the remainder of 1977 with the Pirates’ AAA team.