This is the rookie card for outfielder Chuck Manuel. (Ok, it's actually current Phillies' manager Charlie Manuel in disguise.)

Charlie was signed by the Twins in 1963, and spent 6 seasons playing A and AA ball before making his major-league debut in April 1969 with the Twins. During his rookie season, Charlie was one of 4 players sharing the starting assignments in left field, along with veteran Bob Allison, fellow rookie Graig Nettles, and Twins' regular center fielder Ted Uhlaender.

I guess Twins' management didn't like Manuel's .207 batting average, because he spent much of the next 2 seasons in triple-A, although also playing in 77 games for the Twins over the two seasons.

In 1972 Charlie was back with the Twins for the entire season, but saw action in just 63 games, more than half of them as a pinch-hitter. Charlie's .205 batting average in '72 was better than the .188 and .125 he posted in the previous 2 partial seasons, but it wasn't enough to keep him in the majors. He spent the entire 1973 season back in the minors, after which he was traded to the Dodgers. 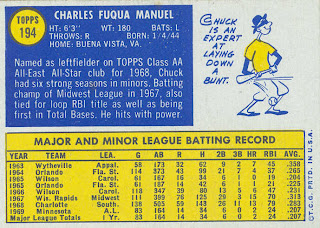 From 1976 to 1981 Charlie played baseball in Japan. His career took a 180-degree turn in Japan, as he turned into a hitting machine:

Charlie hit 25 home runs in the first 8 weeks of the 1979 season. Many thought that an American should not break the Japanese home run record, so he was beaned during a game in June and missed 6 weeks with a broken jaw. He still managed to hit 37 homers and was voted the league MVP.

Little known fact: Charlie's nickname was Cornbread while he was with the Twins.

Hard to believe that this is the same guy now in the Phillies Dugout.