Here is Jack Billingham's 1970 card. It's been a full season since he was traded to the Astros, yet we still get a hatless card! This is one of five 1970 cards that were sent to me by DeansCards.com last fall.

After the 1968 season, Jack was selected by the Montreal Expos in the expansion draft. As I mentioned in the Curt Flood post below, the Expos attempted to trade Donn Clendenon to the Astros in January 1969 for Rusty Staub. When Clendenon refused to report, Montreal shipped Billingham to Houston as part of the package to salvage that deal.

Billingham pitched for the Astros for 3 seasons (1969-71). Mostly a reliever in the minors and for his 1st two seasons in the bigs, Jack moved into the starting rotation beginning in 1970. 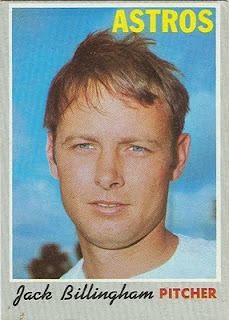 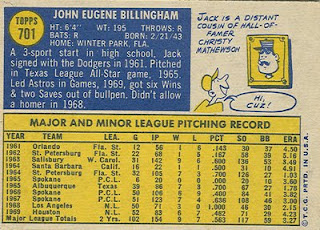 Following the 1971 season, Jack was on the move again. This time, he was part of an 8-player deal with the Reds. The Astros sent 5 players (Billingham, 2B Joe Morgan, SS Denis Menke, and outfielders Cesar Geronimo and Ed Armbrister) to the Reds for 1B Lee May, 2B Tommy Helms, and utilityman Jim Stewart. This seems like a crazy lopsided deal now. The Astros trade Morgan AND FOUR OTHER PLAYERS for Lee May, a fading Tommy Helms, and a scrub IF-OF? It seems like the Reds should have traded May and 1 other player straight-up for Morgan! (But I digress.....)

Adding to the Reds' fleecing of the Astros was that Billingham's career caught fire in Cincinnati. He won 19 games in both 1973 and 1974, and finished in the top 6 in Cy Young voting in both seasons.

Jack pitched for the Reds for 6 seasons, winning (and losing) in double figures in each season. After the 1977 season he was traded to the Tigers, and pitched in Detroit for 2 full seasons and 1 month into the 1980 season.