Pedro was signed by the Cardinals in late 1964, but did not start playing until 1966. After 3 seasons with 3 different class-A teams, he was selected by the Angels in the Rule 5 draft in December 1968.

Borbon played one full season (1969) with the Angels, pitching 41 innings over 22 games, then was traded to the Reds in the off-season (with pitcher Jim McGlothlin) for outfielder Alex Johnson and infielder Chico Ruiz. 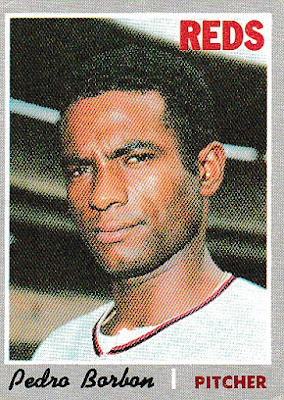 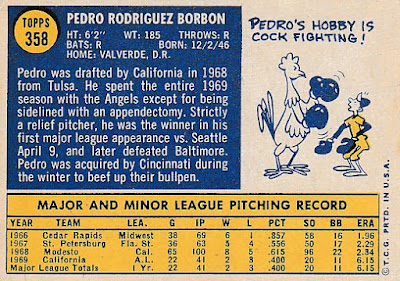 Pedro made the Reds on a full-time basis in 1972, and was 2nd to Clay Carroll in games and saves. In 1973 he posted a career-high 11 wins, while leading the staff in games and tied with Carroll with 14 saves. In 1974 he led the bullpen in games and innings pitched, and again collected 14 saves.

For the next 2 seasons, Borbon maintained his high games and innings workload, although newcomers Rawly Eastwick and Will McEnaney picked up most of the saves.

With McEnaney traded before the season, and Eastwick traded in mid-season, Pedro was the team’s top reliever in 1977.

In 1978 he had a reduced role in the bullpen, although he posted an 8-2 record. In 1979 it was Borbon’s turn to go – traded to the Giants in June for outfielder Hector Cruz.

He played for the Giants for the rest of that season, then was released just before the start of the 1980 season.  Pedro hooked on with the Cardinals at the end of Aptil, but after 10 appearances he was released at the end of May.