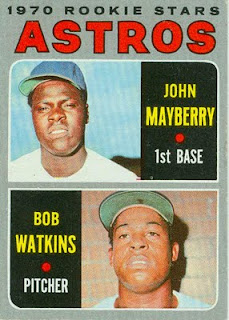 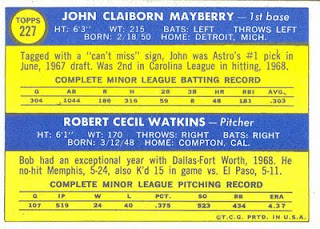 
Bob Watkins? As is so often the case with these rookie cards, one player makes it big while another fades away. Watkins' big-league career consisted of 15 innings with the Astros in 1969. He pitched in their farm system from 1966 through 1971.
Posted by Jim from Downingtown at 8:07:00 PM

By an unrelated search I found out Google Book has library of Baseball Digests. In the 70's BD would have a rookies to watch section: Here what it said abou Mayberry: "Can't miss. Does it with bat and glove and hits with power. Also surprisingly fast for bbig man"

Satkins: "Major league fast ball, curve and slider, but minor league control. If he can find plate has chance to advance rapidly."